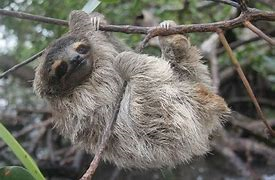 I often wonder if these animals have worked out the meaning of life....
﻿

I did not get the Denmark Strait action fought. Time ran away from me as we had a number of domestic duties to tackle as well as the usual weekend routine 'stuff'. By the time I was able to get into the man cave with every intention of fighting the battle I was too tired to do anything more meaningful than some gluing. My resolve melted like an ice cream in the May sunshine - it gets very warm in the man cave - as, to be honest, I was feeling pretty lethargic and sloth-like as a result of the busy day we had spent.

I was however, able to glue the Royal Navy Axis and Allies ships on to their bases and the Kriegsmarine ships have all been cleaned up. These will be glued to their bases before the weekend so I can at least get them undercoated. The weather has been hot and sunny with clear blue skies but it has felt really oppressive. This has slowed me down somewhat.

Apart from the naval non-event I have spent some time pondering matters relating to my avowed intention of tackling something for The Men Who Would Be Kings and Congo. There is no hurry with this but I want to get a plan in place sooner rather than later. I know this smacks of 'ticking things off for the sake of it' but I find that it helps me to know what I am going to be doing even if I am not doing yet!

The Colonial 'period' has a lot going for it in terms of variety but true to form I would prefer to tackle something a little less than mainstream. Much as I like them this means no Zulus or the Sudan. I rather fancy the North West Frontier between 1890 and 1920 or the Foreign Legion over the same period.

Being primarily a solo gamer I am quite used to thinking about raising both sides for a game and this would be no exception. I am presented though, with a rather delicious conundrum in that (and I have said this before) these rules would work equally well with 54mm figures. In fact I acquired a whole pile of Armies in Plastic stuff for the Foreign Legion era - partially used in  turn to acquire a vast quantity of Axis and Allies material - but never pushed through with it.

Another film from my list of those I have not seen - although I am currently watching it courtesy of iTunes.

It would be easy enough to amass the material required for the adventures of the Legion. For the French I would merely need some artillery (Armies in Plastic produce a rather nice screw gun which would suffice) and a machine gun. It would be nice to have some mounted troops - I have always had a soft spot for French Colonial cavalry - but these would need to be conversions methinks. The Arabs would be straightforward enough as Armies in Plastic produce them although they represent several quite distinct tribal groupings.

Add in some palm trees and perhaps a couple of the Airfix 1/32nd scale desert outposts (actually 'normal' Arab style dwellings would be easy enough even for me to knock up being as they are, essentially boxes of various sizes) and away we go.

I have yet to make a decision as what I am going to do for this period but by virtue of the fact I already have some material to hand for the Legion it would need a compelling argument for me to not to proceed with it - in 54mm or otherwise.

Good to hear from you and I hope all is well at your end!

You are of course, absolutely right!

Both Congo and TMWWBK’s are superb. Funny enough after completing Sub Saharan French for the 1890’s I am working on a French Army of Africa Force, including Beau Geste Classic FL. These are in 28mm though.
I have morphed my Congo Zanzibari into a TMWWBK’s Force. These include Baluchi which with the addition of an Afghan Artillery piece make up a NWF Force. You may have noticed I like multi use units.
After that it’s Boxer Rebellion relief Force troops. Again some of my French units can be used for this.

I would be really interested to share some research with you as you seem to be much further along than I am! I would also like to see your Congo Zanzibari TMWWBK Force list as although it is not for me I know a man that would be REALLY interested!

Joking aside I like your thinking in respect of multi use units.

Am on hols at the moment, but from memory...

1 unit Askari Artillery, Foundry. There are also actual archaic Zanzibari artillery made by Foundry. The British supplied seven Whitworth Artillery pieces at some point. I am guessing these were 1860’s vintage?

Email me and I will try and send some pics.

The above can be pointed up in various ways to give options on the Field Force.

My regulars are in the all white ‘Egyptian’ style uniform with red fez. The earlier uniform had a black jacket. Later uniform was Khaki, probably under British influence.

Email me and I will try and send some pics when I can.

That is really helpful and I will ping you an email later. It would be good to see some pictures as well as the whole set up sounds very exotic!

All the best and many thanks once again.