﻿
Nothing like some inspiration in readiness for a table top refight!
May 24th is of course the anniversary of the catastrophic sinking of H.M.S. Hood by the German Battleship Bismarck in 1941 during the battle of the Denmark Strait. I have a modest selection of ships for both the Royal Navy and the Kriegsmarine being part of my Axis and Allies Boardgame miniatures selection, so I decided to push ahead and paint the main four ships that took part - Hood, Prince of Wales, Bismarck and Prinz Eugen - with a view to refighting the action. I suspect that there have been plenty of refights of this battle over the years so I offer no apologies for tapping into a well-worn seam! 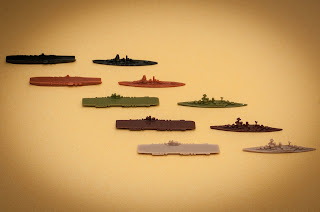 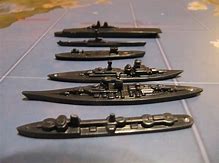 From the Axis and Allies 1942 set - Bismarck and Prinz Eugen 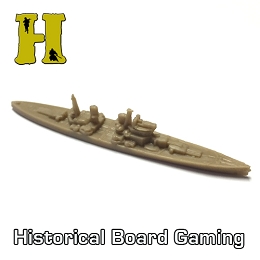 
The models as mentioned are from those available from the Axis and Allies grand strategy wargame. the KGV comes from the Global Conflict game produced by Historical Boardgaming and compatible with the Axis and Allies range. They painted up very easily using my tried and tested black undercoat and drybrushed grey with blocked in decks method (courtesy of Tim Gow). The models are on 2mm MDF bases courtesy of Warbases with added names and ensigns as per my usual method for these things.

At the risk of offending the naval purist I have opted for a uniform early war overall grey finish with the British being in a darker grey than their German counterparts. The models were undercoated in acrylics, the grey was Humbrol enamel (simply because I still have tins and tins of the stuff!) and the decks were Vallejo. The grey was then selectively (and carefully) highlighted in a lighter shade of grey and then topped with white. Being a rather slothful type I did not even bother to wash the models before painting them (actually I forgot to do this) but there were no adverse effects in respect of paint coverage.
The models are not bad detail-wise but the upper works on both the Hood and the Prinz Eugen are a little on the 'heavy' side - especially the latter which does a passable impersonation of a modern US Ticonderoga class AEGIS cruiser! Still, let us remember that these are gaming pieces and not scale models after all! I hope to have pictures of the models up over the weekend , once I have finished the bases.

In the meantime I have been revisiting the book you see at the beginning of the post to get me in the 'zone' so to speak.