Boot Sales, Battleships and a Cruiser

It has been a busy weekend and no mistake. To begin with Holly, my daughter, was back for the weekend from University and my Grandson was with us as well so it was quite a house full. SWMBO and I spent time on Saturday at our local Wickes planning the new bathroom as well as the usual weekly shopping round. then there was the small matter of the Royal wedding and the FA Cup final (a great way for Mr. Conte to sign off if that is what will be happening).

I had hoped to get a sheet of MDF cut but time was against us  - which was just as well as I discovered a 5ft by 3ft in the shed! All it needs is painting and grinding and will then be real to use. In the meantime though I could always grid the cloth I have or could even - and this came to me yesterday afternoon - use Barry Carter's rules without a grid and merely use multiples of 3" for movement and firing. I would need to add in some turning rules but I reckon this has some mileage in it especially as it would serve to open the table up for more manoeuvring.

I was able to finish the four ship models I will be using for the Denmark Strait refight so without further ado here are the stars. 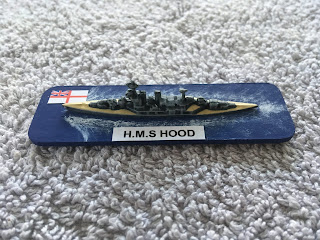 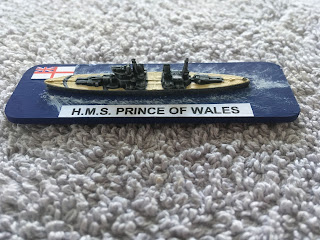 The ill-starred Prince of Wales. The model is the sole entry from Historical Boardgames from their Global Conflict game. Made from a softer plastic than the Axis and Allies models they still paint up really well. 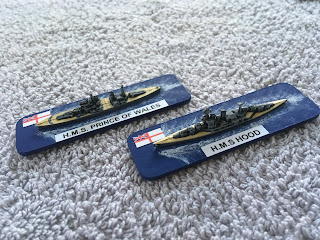 The Royal Navy steaming hard for the Denmark Strait across a grey towel on the kitchen table.... 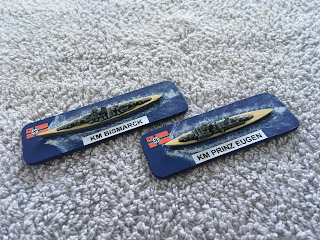 The German opposition needs no introduction. 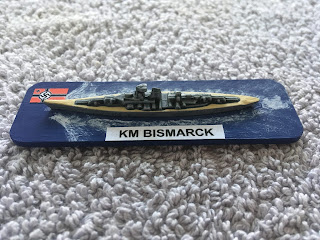 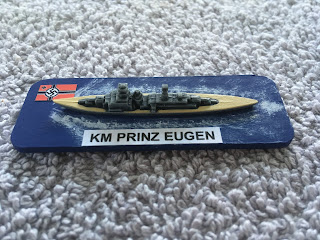 I must admit I am not a great fan of this particular model as the forward superstructure looks way too heavy. She paints up well though and is a mere 5cm long.

Bearing in mind these are first and foremost gaming pieces from a board game and would certainly not win any prizes for detail I think they scrub up rather well and so I am happy in my decision to use these models for my WW2 naval games. If you look closely there are mould lines and 'soft' details but these are minor points when you consider the ranges they will be typically be looked at. They will not be to everybody's taste but I like them and so am happy to use them.

Earlier today SWMBO and I headed out to our usual local boot sale and there I opened my account for the year with the following two books. 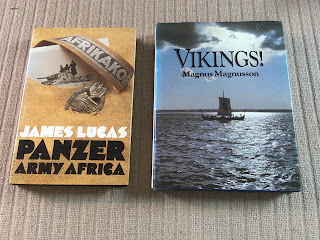 £1.50 for the two which for a couple of hardback books is not bad.

The Panzer Army Africa title is a good primer of the army and campaigns fought by the Germans in the desert and includes a useful section on the fighting in Tunisia - which if you recall is where my 'What a Tanker' aspirations are.

The Vikings title is the accompaniment to the BBC series of the same name from a good few tears ago narrated by Magnus Magnusson. I remember watching that and really enjoying it and so I hope it will give me some inspiration - perhaps for Saga or even Lion Rampant.

So all in all it has been a productive and busy weekend and one that I have enjoyed enormously.

A fine brace of ships, and yes Prinz Eugen looks a bit strange.

Many thanks old chap! The funny thing is that Prinz Eugen does not look too bad when seen in profile. It is a shame though but I can live with it. At the end of the day they are only gaming pieces and not scale models.

Wonderful painting at this scale, impressive!

Many thanks old chap (and I consider your comment to be high praise indeed)! The painting technique was suggested to me by Tim Gow and it works a treat - as well as being pretty quick to do. The only thing I would change is to pay a little more attention to cleaning up the models first of all - when you enlarge the photos the mould lines look rather impressive!

Great models and very nicely based as well.

Thank you old chap! From pretty average beginnings they don't scrub up badly. GHQ they are not but they are fit for purpose and suit the space I have available at home very nicely. Capital ships come out at around 1/3800 to 1/4000th.

I am very impressed with the way you have turned some fairly basic boardgame playing pieces into excellent-looking models by the simple process of painting them so effectively.

I can hardly wait to see them in action.

Many thanks old chap - much appreciated! Some of the models are better than others but with a quick lick of paint they come up rather well. they are quite a table friendly size and so I am pleased I opted to persevere with them.

I hope to have them in action over the bank holiday weekend.

They look excellent and from the pictures I can't tell of the mold lines etc. Love the basing it looks great.

Thank you kind sir - much appreciated! The basing will be my new standard. I am using 2mm round cornered MDF painted in Humbrol Matt 25 (and yes, it is an enamel paint) with waves dry brushed on. The name label I typed in Arial 10 Bold and then printed on a sticky label sheet (A4 sized - the whole sheet is in effect one label), cut to size and stuck to the base. The ensigns are 1/600th scale and are printed for me by Tony at Brigade Models.

Overall they look rather fetching.

Thank you old chap! The pictures came out a little on the dark side but I can confirm there are two shades of grey (not 50) being used for the opposing sides.

Check out some of the hobby craft/ The Works stores. They have a range of 1/2000sclae models of battles ships which includes Tirpitz and Hood

I have seen a couple of these but sadly my local branch of the Works only has the US ships. I will keep an eye open for them though.