Somewhere in the Sudan....

I made my usual flying visit to the club last night, primarily because my old friends Chris Hardman and Neil Fox were putting on a game of The Men Who Would be Kings. Neil was bringing along the British in the shape of the Firkarwi Land Field force under the command of Colonel Buck-Passer Cleverly (aficionados of Madasahatta will no doubt recall them!) whilst Chris was bringing along rather a lot of newly painted Bashi Bazouks and Egyptians. I did not see the game played to its conclusion but have attached a few pictures so you can take a look. 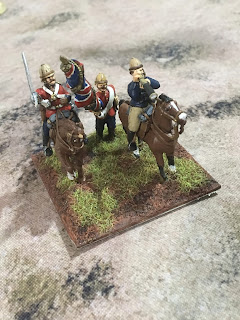 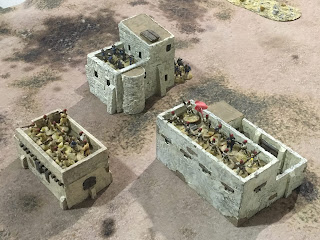 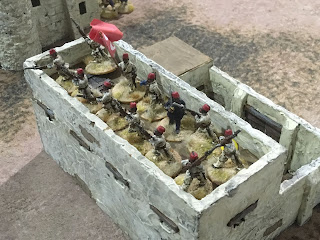 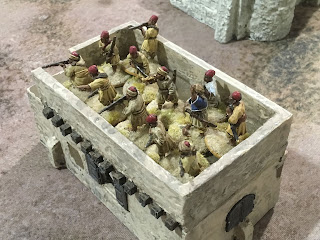 The first of the Bashi Bazouks 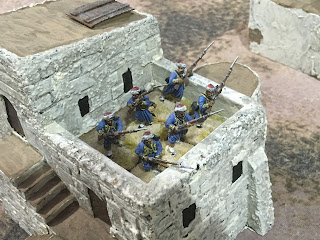 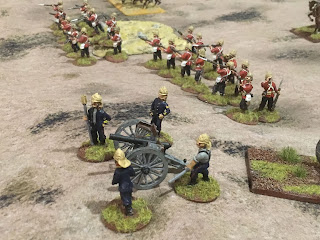 The British artillery supporting the advance of the redcoats in the distance
﻿
﻿
The buildings were a mixture of commercially available and scratch built items from the collection of Chris Hardman who also supplied the table cloth and other pieces of terrain.

Neil supplied the British and a more than passable impersonation of Colour Sergeant Bourne....

Sadly I was only able to stay for a few moves although I should mention that the Egyptians had rather a lot of reinforcement arriving - both horse and foot.

Both Neil and Chris are very good figure painters so seeing them locking horns over the wargames table always means the game will look good. Chris said he kind of got a little addicted to painting Bashi Bazouks and the numbers seemed to go beyond what he originally intended whilst Neil has in mind some additional cavalry for the British.

To finish up with Chris gave me a couple of TMWWBK laminated play sheets whilst Neil kindly gave me a copy of the additional rules he found on the net somewhere.

Many thanks chaps for these and also for the spectacle - sadly my photos have not really done it justice!
Posted by David Crook at 08:42

What an excellent looking game ... and it was great to see the Firkawi Field Force in action again after all these years!

I had a sneaky feeling you would spot that! It looked very nice indeed (as do all the games Chris and Neil fight)with the unkempt, uncivilised and untrustworthy Bashi Bazouks forming a nice contrast to the ordered ranks of the Redcoats.

The commercially available printed cloth Chris used was lovely to look at and would be ideal for most of what I have planned!

Nice pictures. I like the MWWBK rules although I have yet to have a chance to play them.

Neil and Chris always put on a good looking game with well painted figures and understated terrain. This was no exception.

I have not played a game as such although I was running through some of the firing last night and looking a few things up in the rules.

They play very smoothly and are a lot of fun. I will be doing something with them at some point!

I was lucky in that the subject matter was very photogenic! Seriously though, the pictures were taken using my trusty IPhone 5SE.

I was only sorry I could not stay longer as things were beginning to hot up.

They certainly look good and for the record I was told that the British triumphed over the Egyptians.