The Collection of Eric Knowles....Part 3

I was able to spend some time yesterday evening cleaning up the books I received from the collection of Eric Knowles, courtesy of his son Bill. They scrubbed up pretty well and considering their age and storage. The ex-library books (all the Featherstone titles, the Terry Wise book and the small Nash title) had the usual stickers and dust jacket sleeve which I was able to remove from all but two of the books. The plastic was pretty grubby and in poor shape so I removed it where I could leaving some surprisingly fresh looking covers. They all had a good dust and wipe with a barely damp cloth and are now 'airing' off in the man cave. 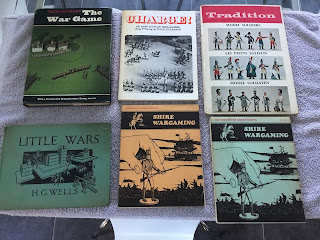 I was particularly pleased with the Grant and Wells titles (I already have another paperback version of Charge! and am now on the hunt for the hardback version) with the Tradition catalogue being a wonderful piece of eye candy. Note the two Shire Publications order pads. 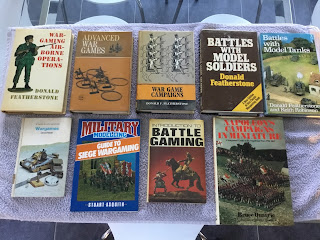 All but the Quarrie and Asquith title are ex-library titles which ordinarily I would not consider (I am a little sniffy about such things, the same applies to book club editions....) but am happy to make an exception in this case!
I was a little surprised to see the Quarrie title in Eric's collection as I never remember him fighting Napoleonic games although he did take part in the famous 1965 refight of the battle of Waterloo. I would have been very surprised if he used the rules in Quarrie's book and so assume he must have acquired this for reference or inspiration. Having said that I remember selling him my assorted Napoleonic Russians so perhaps there is another surprise waiting to be uncovered from his collection.
The Asquith siege title I am not in the least bit surprised Eric owned as he was always quite fond of fortifications and similar. Amongst the terrain pieces that I saw earlier in the week were some fairly extensive 18th century earthworks and stone faced ravelins  - I am no expert on sieges so apologies for any technical inaccuracies - not to mention more pill boxes and gun emplacements, bunkers and block houses than the Atlantic Wall ever had. Funnily enough this is the only book in the collection I have never read nor owned.
The acquisition of all this lot has had a rather surprising effect in that I now have a full shelf in my bookcase of wargames books. There are a few others that I am keen to get and of course there is John Curry's History of Wargaming project which can serve to fill some gaps. This is not a pressing task and so will only happen on an as and when I see them basis.﻿
Posted by David Crook at 08:23

What an extraordinary windfall!

I am indeed a lucky chap and no mistake! I would also be less than honest if I did not say that it has inspired many long dormant passions....

I've followed the story of this nice collection.

Yes, the books cleaned up nicely. I'll echo Conrad above. What a wonderful windfall!

What a treasure trove ! I have no doubt that Eric would be delighted to see both the good home they have gone to, and the envy they are generating.

I am delighted with them and am sure to get lots of ideas from their pages!

I certainly hope so although I suspect he would probably want to know why I have not already got them....

What a wonderful collection, and as others have said, lovely that they have been passed on to someone who appreciates both the books and where they have came from.

A toast then to the late Mr. Knowles, his family, and to your good self.

Many thanks for your kind words - it is much appreciated. the books are relatively easy to come by but knowing where these have come from makes them unique.

We will be toasting Eric in due course as his son plans to have a small gathering of old friends by way of a memorial.