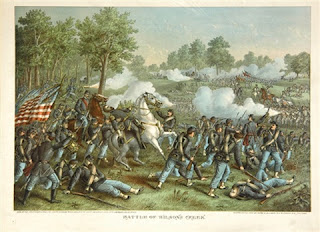 Kurz and Allison print of the Battle of Wilson’s Creek

Atlanta had fallen and so the blue juggernaut advanced remorselessly to the sea, laying waste the countryside along its line of march. The battered Confederates could do little other than offering a  token resistance at selected points and even then such undertakings merely delayed the inevitable.

A scratch force of Confederates under the command of the veteran General Gaylord Beauregard the Third found itself temporarily billeted in the small town of New Rayleigh. His command has suffered fearful casualties and had been chased by the Yankees before, during and even after the fall of Atlanta. Supplies were non existent, his troops were a mixture of too few veterans and too many greenhorns, his artillery was greatly reduced, he himself was carrying a leg wound that was showing no signs of healing and he was fast running out of territory to retreat into. At least in New Rayleigh he had been unmolested by the Yankees for a week or so and this had given him and his small command a chance to reform and reorganise, even resupply or at least to be able to forage without interruption.

The town of New Rayleigh sat between a range of small hills and a wood and featured a single road running through it and down which any Union advance would have to be made.

Beauregard had prepared the town as well as he could with some fieldworks either side of the main road into town. He deployed his artillery in the centre supported by an infantry unit with a further two units in fieldworks on his left. A single cavalry unit was deployed on the far right and his sole reserve, his last remaining infantry unit, occupied the town. The position had plenty of open ground around it which meant that any advance would be exposed to fire. It was not a perfect position by any means but it was the best that Beauregard was able to do with the resources he had to hand. 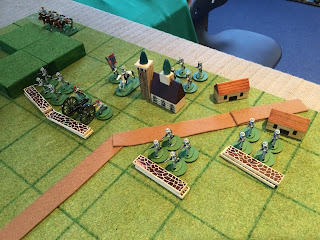 The Confederate position. Note the cavalry deployed out on the extreme right lank and the reserve infantry behind the church

From the other side of the hill....

Elements of the Army of Georgia had been detached under the command of General Kyle. E. Minogue to harry and pursue any Confederate forces along their line of march, a task complicated (at least in the opinion of General Minogue) by a shortage of cavalry and artillery. His infantry was plentiful which was just as well due to his shortfall in the other arms of service.

His scouts had reported that the small town of New Rayleigh had been occupied and subsequently fortified by the Confederates. They estimated the strength to be roughly at brigade level meaning that in infantry alone he was able to outnumber them roughly two to one.

Minogue was well aware of how effective troops behind fieldworks could be and so he was under no illusions that this would be anything other than a tough fight. With this in mind he decided to attack from either flank and demonstrate in the centre. The Rebels would not be moving from their positions so he could dictate the action. The terrain either side of the town could be used, especially the woods to his right. He gambled on the Rebels staying in their defences and so either flank had three units of infantry whilst the artillery in the centre had but a single regiment in support. His cavalry was deployed on his left. His disposition complete, Minogue took up his position at the centre of his command and issued the order to commence the attack.


The respective forces consisted of the following: 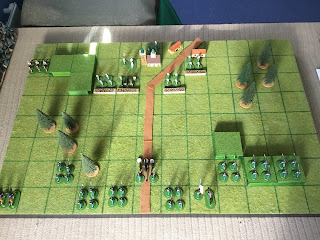 Turn 1. The Union (4 APs) advance three infantry units on the right and move and unlimber their artillery in the centre. The Rebels (3 APs) content to observe the Union preparations, respond by cautiously moving their cavalry forward and opening fire with their artillery but to no discernible effect. 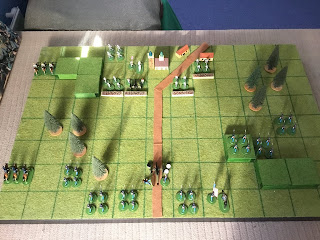 Turn 2. The Union (4 APs) advance on their right continues whilst their artillery unlimbers and opens fire - to no effect as the range is too great to have any impact on troops in fieldworks! The cavalry also trots forward. The Rebels (5 APs) meanwhile order their reserve to support the cavalry whilst the artillery opens fire on its opposite number and draws first blood. 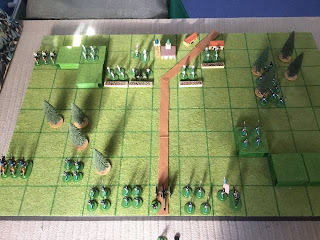 Turn 3. The Union (3 APs), handicapped by poor command, are only able to move into the woods opposite the Rebel position whilst the artillery, seeing discretion as the better part of valour, limber up and retire out of range of the Rebel guns. The Rebels (4 APs) are content to bide their time and merely order the reserve to the top of the hill overlooking the town and in support of their cavalry. 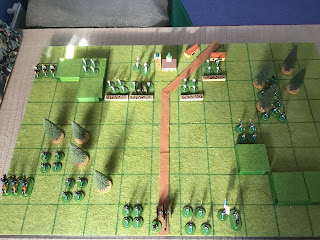 Turn 4. Still hampered by poor command the Union (3 APs) opt to strengthen their right flank attack and also move up on the left. The Rebels (5 APs) again are content to observe developments but they know that the attack will not be long in coming. 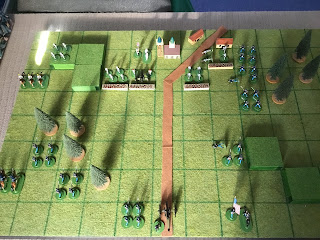 Turn 5. The Union (4 APs) right flank infantry poured out of the woods to attack the Rebel position. Rather than charging in they pulled up short, deployed and opened fire, catching the defenders by surprise. Rebel casualties began to mount although they fought back hard against the middle of the Union line. The Rebel artillery also came into play and scored against an infantry unit sent to support the right flank attack. Meanwhile on the Rebel left the cavalry cautiously moved forward whilst the reserve infantry consolidated their position on the hill. 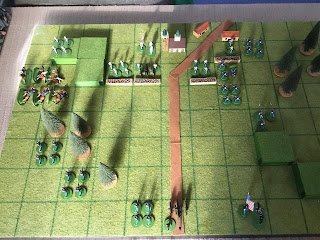 Turn 6. At last the Union command sorted itself out (5 APs) but not in a good way. The cavalry, seeing the Rebel horsemen ahead immediately charged and in the ensuing melee succeeded in their own destruction but not before severely damaging the Gentlemen of the South. On the Union Right the flanking attack continued to blaze away at a distance rather than closing in but to little effect. The Rebels (4 APs) were similarly afflicted in that there was much shooting but with little result. 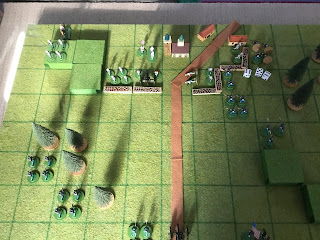 Turn 7. Both sides had their standard Action Points i.e. 4 each. The Union decided to assault the Rebel position and charged in only to be met by a ferocious fusillade of fire (see the dice scores - the Rebels needed 5 or 6s...) that decimated the attackers ranks. Meanwhile the numbers were beginning to tell as the casualties in the more central of the two fieldworks began to mount. The remnants of the Rebel horse fell back behind the right hand hill. 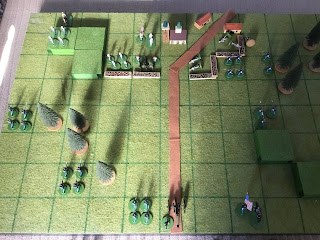 Turn 8. The Union once again experienced some command difficulties (4 APs) but it was enough for them to deploy sufficient men and firepower to finally break in to the Rebel position albeit at a cost. The Rebels had sustained sufficient casualties to take them over their exhaustion level of 8. Two cavalry and eight infantry had been lost against the Union one artilleryman, three cavalrymen and seven infantrymen. It was a Union victory, albeit a Pyrrhic one.

The game was an enjoyable run through of the rather hastily cobbled together set of rules I was using (those from Worthington Games board game Honour and Glory) and of course featuring the 30mm ACW collection. The playing area was a 12 x 8 square grid with 3” squares.

The rules worked well although with some occasional improvisation which will be incorporated in future usage. The action points worked well and the whole movement and combat flowed well enough without any major issues other than some pints of detail I will address.

The Union had a dismal rum of action point rolls meaning that their overall plan was a little disjointed in execution. Their artillery was completely ineffective as  the combat modifier at extreme range meant that it was impossible to inflict any casualties. The Union opted to move their artillery out of range rather than suffer any further casualties.

There was little for the Rebels to do although their reserve could perhaps have been better employed on the opposite flank. Having said that its appearance in support of the cavalry at least served as a deterrent to any Union moves against them.

Great AAR and the commander of the Army of Georgia's name made me smile this early morning! Initially I thought you were using Bob Cordery's PWG rules, but nice to see you trying something a bit different.

An interesting battle report, which reflected the ebb and flow one would have expected. It seems to me that the weaker Confederate force might have won this action if the luck had been just a bit more with them.

The board looked great, and the figures seemed to look good with the simple but effective terrain. I hope that we don't have to wait too long before we see your next battle report.

Many thanks old chap! It has been so long since I fought a game it was rather like going to the gym for the first time after a break - everything seemed to take twice as long to do! The Portable Wargame will be my rules of choice going forward but I just had to try these out.

I am sure we have not seen the last of General Kyle. E. Minogue!

Glad you liked it. The Action Points worked well and with one exception the Rebels were never really caught short. Then again, being the defenders meant that they did not really need to be hugely mobile. The Union struggled in this regard but even when reduced still had sufficient to get their assault in.

All in all it was a bit of a lash up but good fun all the same and I hope to get some another one in soon.

The one thing I have decided though is that I need a larger playing area, rather I need larger grid areas as 3" is a little tight for 30mm.

Great looking game Dave, the troops do look the biz.

Many thanks old chap! Old Painter Bob did a really good job with these and they certainly look the part.