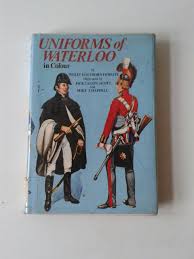 One of Blandford's finest - I now need to get the 1812 and the Peninsula versions!

I have racked what passes for my brain over the whole basing issue and have come to a decision. In truth it is probably the only decision I could make given the circumstances surrounding the collection and the availability of original figures for it. I am going to go with individual bases rather than multiples.

There are a number of factors that have clinched this for me. To begin with, as much as like the idea of multiple figure bases these are only worthwhile in my opinion if you have a number of figures deployed thusly. Placing two infantrymen on a base and calling it a multiple is stretching things a little. Three infantry are the minimum I would consider for a base but a two base unit of 6 figures does not sit well for me – if you are using units that are that small then why not just base then individually and have done with it? This would seem to be at variance with the set up that Bob Cordery has but his collection has a far better mix of figures than mine so he is able to configure his units with identical or complimentarily posed figures far more readily than I can. It looks very effective under these circumstances.

If I were starting a collection from scratch and with a full range of figure poses to choose from then I would use Bob’s basing for certain. Indeed, I plan to get some movement trays organised to fit up to 4 foot figures or 2 mounted which will serve admirably for the Portable Napoleonic Wargame or for when I go ‘off the grid’.

Using individual bases will mean that I can utilise far more of the collection than ordinarily as I will not be constrained by the making up of bases of similarly posed figures. Obviously I will do this as far as possible but it means that I will have the flexibility to chop and change unit compositions as and when I need to. This is only an issue with the infantry as the cavalry are far more uniform in respect of poses.

The appropriate bases have been ordered so I will be able to get the figures based up and ready to finish off with my preferred shade of green (Humbrol Satin 131) green and plenty of gloss varnish.

Whilst I was pondering the thorny question of basing I have been spending a lot of time revisiting the Waterloo section of my library. I am embarrassed to say that it is a shadow of its former glory as I disposed of a number of books whilst having one of my periodic reorganisations. One casualty was a copy of the Blandford book: Uniforms of Waterloo by Philip Haythornthwaite. I am happy to say this has now been rectified and so the uniform section at least for my Waterloo library is complete as it now resides alongside my copy of Ugo Pericoli’s work and the two volumes of Funcken. I appreciate that these books are quite old but they have a sentimental value for me above and beyond any apparent inaccuracies. My armies will look close enough to their historical counterparts – as long as one does not look too closely that is!

Love that particular book! I still have the copy I purchased in about 1986 or '87, and once upon a time I nearly read the words off the pages. Surprised the binding held, but it did, and now occupies a top shelf in the living room along with a number of other similarly sized uniform references.

I have owned two hardback and a softback version of this book so this will be my fourth copy! They were a great series of books and I should really reinvest in more of them but for now this will do.

I really enjoyed the coverage of the allies and I am hoping that it will give me some ideas for some paint conversions.

I'm glad you've solved your basing dilema. I don't have the Waterloo book, but the Peninsula War one is full of stunning illustrations, so hope you can get a copy at a good price.

This is one of the first books about the battle of Waterloo my teenage pocket money could buy back in the 80's (after saving up, that is), and among the books that helped me immensely with my English! I still enjoy browsing through it, even though it is very traditionally dismissive of the other Allied troops, especially the Dutch-Belgians. But a great reference work nevertheless!

I have both the Waterloo and Peninsular Wars books and it is amazing what four years difference made in his artwork. I much prefer the later Peninsular art where you have characters rather than manikins and campaign rather than parade ground uniforms. A matter of taste, of course, and for the old school toy soldier look, the Waterloo style might be more useful.

Single figure basing seems just right for the size of your battles, and it will simplify rules, as you can apply common rules to both ACW and Napoleonic battles.

It is a great book and the point about being ‘traditionally dismissive of the other Allied troops’ is very well made. I believe that more modern works have attempted to rectify this.

The fact is the Dutch Belgians were a significant part of the Allied army so their role deserves more recognition than is normally given.

You are absolutely right about the ACW and Napoleonic ‘cross over’ in respect of rules. Bob Cordery’s rules (the Portable Napoleonic Wargame) are equally usable for either period and by using the planned sabot bases I shall be able enjoy using them as well.

The Del Prado collection are quite toy soldier looking so the Waterloo book is a great complement to the the figures.