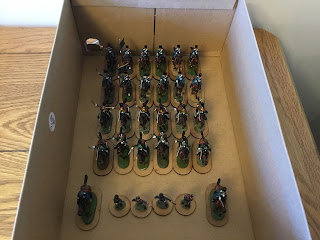 Prussian cavalry (Hussars and Dragoons) and a few gunners on their bases and ready to be refurbished. Seeing them like this has convinced me that my basing decision was the right one.

Phew! A four hour drive home yesterday followed by the inevitable post-weekend domestic round and I still managed to get all the Prussian cavalry on bases as well as resuming the clean up of the remaining British infantry. Being up close and personal with the Prussian Cavalry has raised or rather confirmed the minor issue of some basic renovations.

Some of the figures have a few chips and dinks in the paintwork so I have come up with the following plan.

Once the figures are on their bases (which are useful to hold on to whilst painting) I will carry out the required touching up - for the most part it seems to be swords, bayonets and shakos with the occasional horse leg - before tackling the bases and varnishing. I am going with matt for the bases and gloss for the figures.

I have one more batch of figures to soak off their bases after those currently in the ‘tank’ and this will then mean that all the allies - Anglo-Dutch and Prussian - are close to being ready for the next stage. I shall get every figure on its respective base before the brushes come out - which in reality means that the actual painting part of the project will not start until next month as I want to have the entire collection prepared before phase 2 commences, In the meantime though, work will continue with the French army next on the list for its soaking.
Posted by David Crook at 15:50

I think it's a good move to get everything re-based before you start on the painting. Nice to know that you only have some touching up to do here and there though.

I have gotten the last of the Prussians and Dutch-Belgians off their old bases so merely need to file off the residue and they are ready to put on the new bases. There is a minimal amount of touching up needed so once I get to the painting it will mean that I am close to being ready for action.

I would like to have the entire collection on a war footing by Easter if possible.