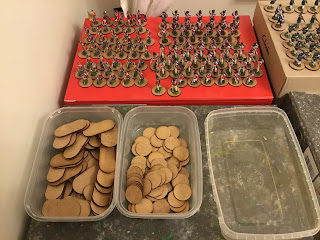 British Infantry (the red box file was purely coincidental!) with Prussians in support. The 25mm circular bases have taken a hammering so a new order will be on its way for some reinforcements. The empty container will be full of Frenchmen tomorrow.

Considering I have just had a week and a day off work you would be forgiven for thinking that I am fully relaxed and refreshed and ready to once again gird my loins to reenter the rat race....

It has been an veritable whirlwind of activity (nothing to do with Ciara and Dennis mind) on the domestic front with a pair of significant birthdays, two trips away, a wedding anniversary, parcel packing, two shopping expeditions and the assault on the man cave.

Despite all this I have made some fantastic progress with the Del Prado collection. All the Allies - Prussian and Anglo-Dutch - are now off their old multiple bases and on their new individual ones. That is some 70 mounted and roughly 250 foot. I am very pleased with this effort and so tomorrow will see me starting on the French with the first batch going into soak.

I reckon I have lost around 3 or 4 figures to irreparable damage sustained whilst removing them from their original bases which is pretty good in my opinion.

I have a few packs of figures acquired from eBay en route and I have also arranged a trade for some surplus figures from the collection of Bob Cordery that I shall be acquiring later in the month. I am really pleased to have gotten this done and although there is still a lot of work to do I am looking forward to the next phase which will see me getting the paint brushes out.

Well considering how busy you've been, you're making great progress. I wasn't sure how I felt about the individually based figures, but they look great on the round bases. Great to see you might be able to start some painting soon.

The figures look pretty good on the individual bases and when used in conjunction with the appropriately sized movement trays have a huge amount of flexibility. The figures are not perfect by any means but they are ideal for what I have planned for them and when fully gloss varnished have that wonderful old school look.