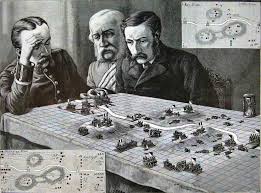 I am pretty sure that most, if not all, wargamers have their own ideas of how battles of a particular period are fought. They will have read up on the period - usually in general and more specific detail - and will have in their mind's eye an impression of what it would have been like. Occasionally there may be a suitable film or TV show that helps to reinforce the impression (for good or ill!) so, at the risk or repeating myself, one has a good idea of how things should look when being translated to the table top.

I am also pretty sure that most wargamers are inveterate tinkerers. How many of us have taken a perfectly usable set of wargame rules and added our own set of 'house rules' or amendments? I reckon quite a few of us have done this at some point in our gaming career - I know that I have.

So where is this heading then? I am keen to put my own stamp on the rules I want to use for the Napoleonic and ACW collections and whilst there is nothing wrong with my default options - the Portable Napoleonic Wargame/Command and Colours: Napoleonic/Charles Wesencraft's Wargames book - I have some ideas of my won that I want to try out.

The rules I have in mind are very much a fusion of several sets - no real surprise there methinks - but it makes sense to outline the foundations.

1. The rules will be hex based and designed with a playing area of 13 x 9 hexes in mind.
2. Units will be 2 to 5 bases strong - and a base can contain a variable number of figures.
3. Where possible unit formations will be depicted - this will include detachments for skirmish screens etc
4. Combat - both fire and close - will be resolved using 1 dice per base.
5. Units will be ordered based on the scenario/army rating - typically 4 to 6.

The above are fairly obvious points but number 2 is an interesting one. Originally I was looking at one figure = one block which is certainly viable for larger actions. However, at a lower level I plan to make up units of bases of figures as this will look better. Typically a four base unit would have two figures on each base for eight figures in total. With this approach in mind you can see the advantage of using figures based individually rather than in multiples.

I need to order in a number of movement trays from our friends at Warbases to achieve this effect and my experiments using card cut to size looks really promising. Using a 4" hex in conjunction with 25/30mm figures means that realistically the largest ground are occupied translates as 4" by 4" which means 8 cavalry figures (4 x 2" x 2" bases) or alternatively a 5 base infantry unit deployed as 4" x 2" and a single 2" x 1" base. In other words this fits in perfectly with the unit sizes I want - either the single figure = single block or single base = single block.

It is early days with this idea at present but it certainly looks feasible and so is something I want to pursue. For now though, the priority is getting the figures ready.
Posted by David Crook at 14:23

Interesting post David. I’ve gone through similar processes myself over the years with SYW rules. I found that sometimes my own wants pushed up against the constraints of ‘off the shelf’ rules so much I couldn’t reconcile the competing tensions I ended up starting almost from scratch.

Whilst I’ve got the basic structure complete to my satisfaction, there’s still a lot of challenges to be resolved.

I’ll be keeping an eye out for updates on your rule development.

All sounds good to me and I'm sure we all tweak rules to suit our understanding of history, battles etc. I must say out of all the 'Old School' wargames books, Wesencraft's are the ones I've found most interesting and relevant to more current rules. Not that i've played them but I find them an interesting read.

I am fortunate in that my fallback rule sets are perfectly usable so this is really 'scratching an itch' in terms of doing my own thing.

My thoughts are slowly taking a cohesive form and naturally there will be regular updates on the blog.

I always found Wesencraft's book to be ahead of its time in many ways and even now it is still an inspiring read.

Over the years I have gone down the uber detailed rules route (with the headaches to prove it!) but now prefer far more user friendly rule sets. As long as it feels right then it must be right has been my mantra for a few years now and so I hope that these rules will reflect this.

I find it always interesting to see how others go about their wargaming, up to and including their ideas on rule sets.

The basic idea looks sound but have you tried fitting 4 x 2"x2" bases into a 4" hex?

My experience suggests that unit would fit into a 4" square with no terrain but experience tells me that the corners will hang out which means 2 adjacent units will overlap. Can you squeeze the figures onto 1.5" bases?

Ideally I want the figure bases to occupy no more than half a hex so for cavalry some creative thinking will be needed. I have a couple of ideas to play around with so watch this space.