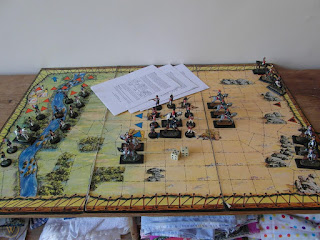 Now there is a rather imaginative use of Del Prado Waterloo figures and the board from the old Waddington's board game: Battle of the Little Big Horn!

The first phase of the great Del Prado renovation is drawing to a close. I currently have 8 figure units of French Dragoons, Carabiniers and Cuirassiers soaking off their bases and have a single 8 figure unit of Cuirassiers left, which will be going into soak this evening. My order for more 25mm bases from Warbases is on its way so by the end of next week everything will be ready on its new base for painting. 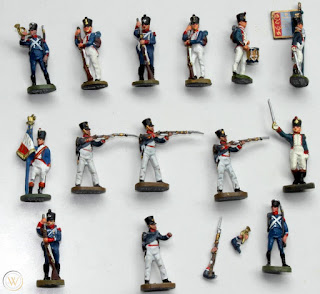 A selection of French line and light infantry figures. The musket and right arm are separate and occasionally require fixing back in place. Of the figures in my collection I have had two such repair jobs which is pretty good going in my opinion.

I made rather a schoolboy error in that I had lumped all what I thought were French line infantry into a single pile whilst bemoaning the fact that I did not have Young Guard infantry. I should have looked more closely as sure enough, there were some 17 Young Guard figures lurking amongst their comrades of the line.... I only became aware of this when prompted to check the model number on the underside of the base against the catalogue.

Due to this discovery I am now a little light on French line infantry rank and file figures but fortunately I do have plenty of command figures to bulk out the units. I am most certainly not short of French light infantry though.

Aside from some trading of figures I am doing with Bob Cordery I have also raided eBay for some bits and pieces. These are a little dearer than I would like but needs must and all that. Fortunately I have not needed to get that many.

It is the Cavalier show at Tonbridge on Sunday which I shall be attending and am looking forward to enormously. Aside from it being the first show of the season (at least for me anyway) it is a great opportunity for me to catch up with friends old and new, to indulge in some post new year retail therapy and most importantly of all - to hand over and/or receive items for use in one's projects. Also, for the first time since I cannot remember when I shall be looking at buying some paints....

I loved this game, sadly during my growing up phase I threw it out. Ah the stupidity of youth.

I remember playing this game a lot in my younger days although I never owned it. You can get copies of this on eBay occasionally but they are not usually very cheap.

You are going were "strong" on this Napoleonics theme. I am impressed. PSI must get round to those 25mm Malburians ;)

I have to say that I have not been so enthusiastic about a gaming project for a long time and so am really enjoying the whole process. I am looking forward to getting the armies in action but for now it is on with the practicalities.

I thought the WSS was starting in January?

War of the Spanish Succession aka Marlburian....:-)

For a second I was thinking the WSS magazine
I have been sidetracked into making up the 28mm WWII figures I have somehow collected
I seem to be going through a kit making phase and I did end up playing the Siege of Vienna in January/February
Will post more on these things shortly
The latter did inspire me to think of WSS again!
I have been through a butterfly phase ;)

In the immortal words of Yoda..."Control, you must learn control!"

Great to know that this project is got you rather enthused, which is always nice for us gamers. Hope you have a good show and take some pics if you can, as it's a tad far from Bristol.

This whole project has really given me a shot in the arm and I am so pleased to have been given the opportunity to do so. The last of the cavalry figures for the French are now off their bases so the next step is to file them before mounting them on their new bases. All the French will be done by the end of next week then the painting commences.

I will try and get some pictures tomorrow but even if I don’t there will be plenty of other bloggers that do.