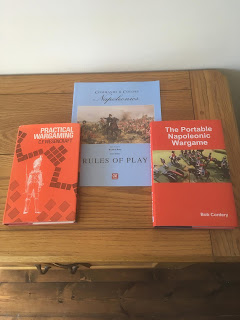 The three sets of rules that will be the foundation for my Napoleonic (and ACW) adventures although I have a few ideas of my own that I will throw into the mix.

I have been rolling a few ideas around about rule options to go with the Del Prado collection and whilst I have more or less settled on the Portable Napoleonic Wargame and Command and Colours Napoleonic (minus the command cards though) there is naturally scope for plenty of other things.

A number of year ago - this would be the late 1980s - I purchased a number of packs of RAFM iron on hex transfers with a 3 1/2” grid. These were in support of a set of rules I came across that were hex based (very avant garde for the late 1980s!) for the Napoleonic period. I cannot remember what the rules were called or even if the were produced by RAFM - as near as I can recall I picked them up from a Wargames show - but the one thing that stuck with me was the scale. A single figure equalled 125 men so a 500 man unit was represented by 4 figures.

I can remember being hugely inspired by this concept and in many ways it has stayed with me - that and the article by Charles Wesencraft on Napoleonic battles using a single figures to represent a battalion. These made a long lasting impression on me and have influenced my thinking to this day.

My own spin on the period will incorporate ideas from a number of sources and I am fortunate that even if the end result does not work out as envisaged I will still have the above sets to use. My thoughts in a little more detail will appear in due course but for now it is back to the basing.

'I can remember being hugely inspired by this concept and in many ways it has stayed with me - that and the article by Charles Wesencraft on Napoleonic battles using a single figures to represent a battalion. These made a long lasting impression on me and have influenced my thinking to this day.'

Hi David
Apart from my Napoleonic Armies under my BE4ST rule having no formal organisation below Division (infantry) or Brigade (cavalry) level, it works out at roughly 2-3 figures to a battalion (4-600 O&M), roughly 1 per squadron (200 O&M). 1 gunner represents 8 guns; a gun with 4 of a crew, a 32-gun park.

But that's when I'm NOT playing NPWG (with some minor tweaks)!
Cheers,
Ion

I have flirted with an 8/6/4 figure option for infantry, cavalry and artillery respectively so I can see where you are coming from.

We shall have to wait and see where I land though as I keep changing my mind!

That looks rather more organised than anything I would do!

There will be more for sure!