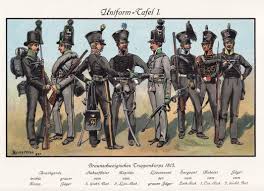 Work on the figures continues apace and it is vital that I maintain a good head of steam as I have a number of domestic issues to attend to over the next couple of weeks. Two birthdays, a wedding anniversary, a party and a family dinner out rounded off with a visit to Cavalier at Tonbridge on 23rd February. In addition I also have some parcels to get posted out (that will be my job for tomorrow) as well having the fitting of my new glasses. All in all then, February is a busy month but Cavalier will round it off nicely.

The British heavy cavalry were taken off their bases and the first of the infantry went into soak. I also made a start of cleaning up the Prussian cavalry bases prior to painting. I have sourced some additional figures for the collection and have also arranged some trades with Bob Cordery who had some spares squirrelled away.

I had thought about painting as I went but I have decided instead to get all the figures off of their original bases first. I am fortunate that the cavalry are based on 2" squares with two figures so in some cases I could get away with merely repainting the base. It also means that the various new acquisitions will have filtered through into the collection.

I have been giving some thought to the organisation of the collection and whilst it has not in anyway been finalised I am looking along the following lines for the Anglo Dutch.

I have a substantial amount of this lot to hand and the number of figures I will need to buy in from Tradition is quite modest and at this stage limited to the Brunswick contingent.

There is one key difference in the way I am organising the above in respect of the Portable Napoleonic Wargame. I intend using light infantry units and skirmishers in addition to rifle armed specialists. My early thoughts on this are allowing an infantry unit to deploy a single figure in the hex they are occupying to indicate that a skirmish screen is present. There are a number of kneeling firing figures in the collection so this would be a good way to make use of them. Similarly there are a number standing figures reloading muskets which I could use as garrison markers - indeed Bob Cordery has whole formations of these.

I have some ideas around the rules governing the use of skirmishers and to be honest it is a component of Napoleonic warfare that I am keen to allow for in my games.

The Prussian army is far more straightforward and will need some additional troops at some point but there is sufficient to begin with.

Ideally I would like to add a couple of line infantry regiments and perhaps some Jager but other than that the force is sound enough for my immediate needs.

Logically i should be outlining the French yet but that will a post for another day.

At the risk of sounding a bit "Poirotnesque" I take it that you aim to have some Dutch troops as well? There was only one Belgian heavy cavalry regiment in the Dutch army of 1815 (the 2nd karabiniers)and more than half the regular infantry and all militia batalions were Dutch.

The Del Prado range is quite limited and the snapshot of the battle that the collection represents does not include any Dutch. In the interests of historical accuracy then yes I should include them but for the present I will go with what I have.