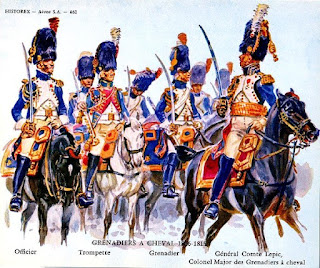 Taken from the Historex website - Horse Grenadiers of the Guard

The final piece of the Del Prado puzzle for phase one of my Napoleonic project is drawing to a close. With the arrival of the goodies from Bob Cordery and a few selected eBay purchases - the final of which should be with me in a day or so - the armies are now looking in fine fettle. For sure I have the final unit of French Cuirassiers to tidy up - smoothing off the bases prior to rebasing - and a small basing adjustment to make for the French Horse Grenadiers of the Guard but overall things are in great shape. The bases of the French Horse Grenadiers of the Guard are over two inches in length and so need some careful trimming back to fit on their new version. It is a pet hate of mine seeing figure bases overhanging the basing material used so it is a niggle I need to attend to. I adjusted one of the eight figures I have and have worked out the most efficient way to do the remainder - it is not difficult but one has to be careful so I do not want to rush it. I have 64 French cavalry in total together with 32 British, 24 Prussian and 8 Dutch Belgian.

The final order I am waiting on is for guns and crews in the shape of 2 French foot, 2 British Foot and 2 Prussian guns, each of these has a crew of 3 figures. The artillery park consists of 4 French Foot and a Guard Horse gun, 3 British Foot and 2 Horse artillery and 4 Prussians guns. That is 16 guns in total. I shall be adding to this in that I want a battery of French Guard Foot artillery and 2 batteries of French line horse artillery. I will also need to think about the allies and their artillery requirements.

I want to get the pure Del Prado figure elements fully up to table usage stage before I embark on a Tradition order as I have more than enough to be going on with and the extra models are mainly for completeness sake.

The last two nights have seen me organising figures rather than actually working on them - it was a necessary part of the process - but this evening will see me resuming the task in hand. The first order of business will be to tidy up the last French Cuirassier unit and then to tackle the overlong bases of the French Guard cavalry. Along with these two tasks I will also be removing the thoroughly soaked bases from some of the figures I received from Bob. Bob uses 3mm thick MDF for his Del Prado collection whereas mine are 2mm.

You would not think that a single millimetre could make that much difference to the removal process but it really does!
Posted by David Crook at 09:09

I found that organising my current 10mm ImagiNations armies made a big difference by allowing me to focus on one Brigade at a time as I could see them all laid out. I wish I'd done this with various projects over the years!

It was an essential part of the process as I needed to see what was what and where the holes are. Some of these are essential additions whilst others are more in the line of chrome.

I plan to conduct a grand review once all the models have been attended to so watch this space!