The Mighty Box of Conan.... 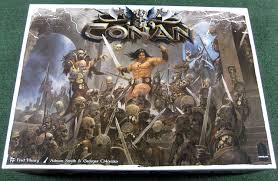 "Hither came Conan the Cimmerian, black-haired, sullen-eyed, sword in hand, a thief, a reaver, a slayer, with gigantic melancholies and gigantic mirth, to tread the jewelled thrones of the Earth under his sandalled feet."

I have always had a soft spot for fantasy stories and those involving Conan the Cimmerian have featured high on the list. I suppose tapping in to one's inner barbarian against the backdrop of the (largely) civilised lives we lead is a welcome antidote to the rule of law and order! In any event I have always enjoyed reading his adventures and the usually overblown style they are written in (they were classic 'pulp fiction' in any event) - probably because I enjoy this as much as the content itself!

After all, there are probably only so many times one can use the expression 'mighty thews' when describing a muscle bound and loin cloth wearing barbarian cleaving an enemy from head to sternum with a two handed sword....

When the miniatures game you see above first came out I was interested in it for sure but it was more than I really wanted to spend at the time despite being crammed with some 74 models produced in various grades of plastic/polythene (and very nice they are as well). To cut a long story short and as the result of some of my legendary wheeling and dealing I am now in possession of the above for a whole lot less than when it first came out.

This is fantasy combat skirmish game with some quite lovely models that will be a lot of fun to mess around with. In fact, I am even looking forward to painting them - which is something I NEVER thought I would say!

In all seriousness the acquisition of this game ticks a number of boxes. It is for the most part self contained and with a lot of replay value. There are a number of expansions available - some of which look like they would be well worth taking a serious look at - so it is not a game that would grow stale over time. Also I have a number of alternative rule sets that would work well for this background. The base game contains more then enough material to be getting on with so as an occasional entertainment this will be money well spent (at least I hope so!).

Ordinarily this kind of acquisition would be a major distraction for me but front and centre at present remains the whole Del Prado project so aside from skimming the rules and re reading the Conan Chronicles for the umpteenth time it will be business as usual. 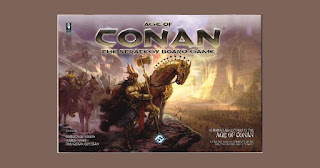 The strategic game - Conan wanders about the map and is used by whoever has his services at the time. It is more about kingdoms battling for supremacy and has been described as a toned down version of The War of the Ring

It will be fun though and I am seriously looking at the strategic level game -The Age of Conan - to provide a backdrop to the skirmish level version.

Almost inevitably I will revisit the Schwarzenegger films and so with that will leave you with Conan's words on the ultimate meaning of life.

"To crush your enemies, to see them driven before you, and to hear the lamentations of their women."

I loved the Robert E Howard stories and they were compulsory reading as a teenager as well as the comics. The cover art was stunning on the books and the comics often were too. Happy memories.

I like Conan as a counterbalance to the seriousness of Tolkien and the complexity of Game of Thrones although it has to be said that both these are better written!

I have a Kindle version of the complete chronicles of Conan as well as hardback omnibus edition. I remember the comics but did not read them and for sure you are right about the artwork.