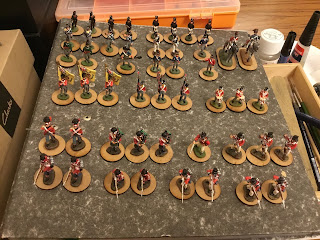 Assorted allies with the (hidden) Prussians currently occupying the shoebox on the left. There are Brunswickers, Dutch-Belgians and a selection of British on show.

The great unbasing of the figures from the Del Prado collection is complete. The final figures - which came from Bob Cordery as part of our recent exchange - came out of soak last night (after 4 days!) and their 3mm thick bases were carefully removed. The bases peeled away, onion-like, with the average being 3 slices a base. There were no casualties! 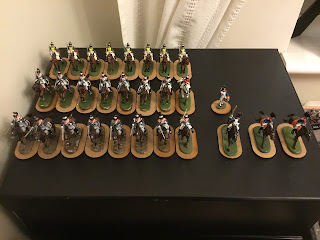 Completed the night previously - some of the French cavalry, in this case two regiments of Cuirassiers and the Dragoons with a selection of mounted commanders and a solitary Old Guard drummer.

After having done this I set to with the super glue and based some assorted allied figures, a sample of which you see above. There were also a dozen or Prussians that are now residing in a dedicated shoebox as their temporary accommodation until something more permanent is organised.

This evening and indeed probably the rest of the weekend, will be devoted to the French Infantry and artillery. The plan is to have the whole lot based by the close of play Sunday and if the additional artillery I have ordered arrives in time that will be processed as well.

The next phase will be painting and varnishing the bases.
Posted by David Crook at 05:55

Nice to see you are nearly at the painting stage of the bases. They look good one their single bases and I think that's the best way to 'display' them.

I see the plan is moving forward Dave.

Once the bases are finished I will be able to use the collection if needs be but I would prefer to get everything finished properly - touch ups, repaints and varnishing - before doing so. Either way it will not be long before they are good to go into action.

It certainly is - and in better time than I had originally anticipated!

Coming along a treat David, and loads of cavalry you have there! A question, are you going to use 8 figure cavalry units and 4 figure foot units or stick with the C&C 'figure per block' ratio? I can see you have the option to use various rule sets based like that which is great.Look forward to seeing some close ups of the Del Prado's (I have never seen one in the flesh so to speak) on the green bases.
Regards,
Lee.

The 8 figures cavalry units are from Old Painter Bob's organisation so figured basing them up individually would give me a huge amount of flexibility in terms of the rules I used. I can go for 1 figure, 1 block or could even double up on this which would look better as the units would have more presence. This is where the standard bearers, musicians and foot officers come in handy as they can bulk up a unit.

If I opted for two figures to a block (and used movement trays for this option) the largest cavalry unit that would fit on a 4" hex would be of 6 figures (3 x 2 figure bases) which would represent a 3 strength point cavalry unit.

My feeling is that I use the figures individually for straight C and C style fights or I would need to standardise units sizes when going upwards into 8, 6 and 4 figures for infantry, cavalry and artillery. I have no real issue with this because I could always fudge it so that the figures represented actual C and C style units by, for example, removing alternate pairs of figures or singles as casualties are inflicted.

Failing that I could have units split between two hexes which is something I am not keen on but it would only be used rarely.

Lots to think about once they are finished and I hope to have this done by the end of April if possible.

Good job David - I haven't had much dealings with the smaller Del Prado figures, but my mother (all right, all right) had some of their larger Napoleonic figurines, and I know the metal they use is a bit brittle, so you did well avoiding casualties.

Over the whole collection (which is over 600 pieces strong) I managed to destroy three figures in total - a Prussian Landwehr infantryman, a French Cuirassier and a private of the Black Watch. All went at the ankles and to be honest whilst a better man than I may have been able to salvage them it was certainly not something I would have done.

In each case I had a surplus available so all was well.

All the French infantry and gun crews will be on their new bases by the close of play Sunday then it is on with the bases.

You’ve made tremendous progress in a very short time, and I look forward to seeing them in action once the collection is complete.

I am itching to get these into action so the sooner they are ready the better!

I have been fortunate in that I have been able to acquire many of the missing figures relatively easily and that has been a big help for sure.

This collection will be completely 'match fit' before I get to the Tradition phase of units that are not available within the Del Prado range.

Looks like your focus on one thing is paying dividends David.

It certainly is and I am properly enthusiastic about progress so far.