More on the WoFun Front

This is not the post I intended writing as originally it was supposed to have been the actual battle report for Gods and Admirals. Due to a variety of reasons this has not taken place but rest assured will be doing so in the very near future.

Aside from the snow my grandson was with us for the weekend so I was rather busy with a few things. On top of all that there have been a few Wofun related issues.

You may recall that in the light of of getting the incorrect size of order sent to me (18mm rather than 28mm) I decided that I preferred the smaller size and so opted to dispose of the 28mm collection in order to finance the remainder of the 18mm. My old friend the redoubtable Mr Fox is now organising the 28mm collection in his usual inimitable style and so I got the order sorted out for the remaining 18mm using the sale proceeds. All good so far and for me, eminently sensible.

I am not pleading poverty at this stage but I should point out that I have a finite budget for anything gaming related. Aside from the odd birthday or Christmas gift card (the children have this more or less as a standing instruction for me - it suits them and it certainly suits me!) and boot sale purchases my enjoyment of our hobby is largely self funding. In other words I sell off bits and pieces to buy new bits and pieces. If I am honest I actually quite enjoy the ‘wheeler dealer’ side of the hobby - I cannot say that I have made huge sums of money doing it - none of the Del Boy style ‘this time next year we’ll be millionaires’ shenanigans - but it has enabled to me to keep ticking over which, as I am on the minimum tier of the furlough scheme, is no bad thing.

Anyway, there were several calls on the warchest arising from the sale of the 28mm ECW Wofun figures which took priority over the 18mm collection. These were duly acquired meaning that my budget for the 18mm figures more or less disappeared. I have no regrets about this as the ECW was always going to be a project for later in the year as my ship building adventures take priority at present.

The 18mm ECW Wofun collection I own is currently horribly unbalanced. It is desperately short of cavalry, has no artillery, no Dragoons and is short of the right sort of foot. I had gotten an order together to rectify this and was in contact with WoFun when I decided that balancing the collection based on what I had would mean that whilst I would have a really impressive ECW set up it would be far too large for my needs. I began to think that on balance this was not a good idea as I could see little point in buying an excess of figures effectively for the sake of it. I contacted WoFun and decided to cancel the order and I also decided that it would be easier to make a clean break from the collection, dispose of what I had and then order in exactly what I wanted rather than using what was there. There was another reason for this in that I am no expert on the ECW and I really wanted to research it further in order to make an informed choice as to the army make up. With this in mind I even went as far as listing the figures on eBay and a few Facebook groups.

Imagine my surprise and delight then, when Wofun contacted me with the news that the order was going to be sent to me in any event as a thank you for my continuing support and unofficial promotion of them.

This is generosity taken to the next level as far as I am concerned - and it is something that will be repaid in full as I have covetous eyes on the WoFun Armada and Trafalgar sets in due course! 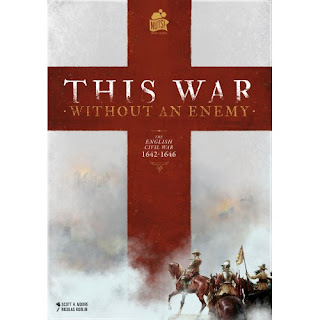 Armed with these additional figures I will be able to tackle the ECW in a substantial way (larger than I would have planned for sure) so I now plan to tie it in with the new ECW block based wargame - This War Without an Enemy produced by Nuts Publishing - for the strategic side (I am not alone in this as fellow blogger nundanket has similar nefarious designs!) and to act as a game generator. It will not be until the second half of this year though as I have ships to build, rules to write and, believe it or not, figures to paint.... 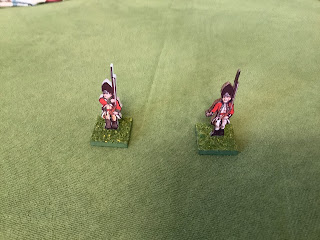 The chap on the right has been varnished and ‘edged’

My good friend Mr Hardman acquired a 28mm AWI set up from WoFun and has been busy beavering away getting them to the standard he requires. He has opted to base the figures his own way and these have also been flocked and the fixing slot filled. He is also edging the figures using Agarax Earthshade - a Citadel brown ink and is also looking to seal the figures using a matt varnish. The effect of this is very impressive looking in my opinion and so it is something I shall do myself when I get to the ECW after the ships.

Mr Fox, always alive to the odd good idea, has opted to use movement trays for his collection and has rather cunningly decided to use a uniform size for a DBA derived Pike and Shot variant. His standard movement tray will hold three bases - a centre pike and two sleeves of shot - which has the added advantage of meaning that a single foot regiment can field two such units. He is also planning on using the Dan Mersey derived Pikeman’s Lament rules as well.

In closing I am hugely appreciative of the gesture by WoFun and I am looking forward to getting some ECW based games in although the collection will now require some work beforehand to get table ready. This is not a problem and will certainly not be difficult but it will take time. In the meantime though I shall be able to search the period in more detail and also think about such things as terrain and also the board game.

That's very generous of Wofun and nice recognition of your positive Blog posts on their products. The ECW is a great period to wargame, with so many options for us to chose from. I look forward to reading how this project unfolds.

I have found them really food. I have received my 18mm Peninsular war, if you check out my Scotia Albion blog you will see what I’ve done with edging and basing. I have to say I’m really taken with the figures.
Glad you’re going to carry on, I have the board game and have similar plans for a campaign but not until I’ve run a War and Peace Peninsular war one 😁

You are absolutely right and I am dead chuffed with it! I am looking forward to tackling many facets of the period and the all important research - for which I mean reading! The plan is to make this my big project for the second half of the year - once the ships are finished.

I am sold on them but circumstances had kind of skewed my approach slightly but all is now well again! It was incredibly generous of Wofun and I will certainly be investing in more of their goods when finances permit. I was surprised that I was nt following your blog so that has now been rectified!

I'm doubting that I will use This War Without an Enemy as a basis for a campaign game now. I'm not sure about all the setting up and storing way the board due to space demands. I know Jonathan pointed out there is a VASSAL version of it, but that would mean not enjoying the actual boardgames for itself. I'm not sure. Confused.com

I am rather fortunate in that I have the full use of the loft as my man cave and whilst it is not ideal for setting up a single large table - I can use a 6ft by 4ft but it takes up a lot of room which is why I tend to favour my 5ft by 3ft table - I am able to set up a couple of tables. This means that I could leave the board game set up for as long as I am using it which is a huge advantage.

It is a while away though as first I have to complete the ships and indeed, I do not own a copy of the board game yet!

I’m quite lucky in having a converted loft so I can have a permanent 4x4 or I can extend it to 5x4 ( big table in garage ) but what I did with the 4x4 is put a timber frame round it 2” high, that way I put the board game in the recess and I bought two boards to sit on top of the frame to play figure games on so a campaign game can be left set up 😁

My loft is also fully converted but as there is a piece jutting out (where the chimney runs) the room is effectively cut in two. I have experimented with a number of permutations but as it is now is about as good as it gets. A further difficulty is that the radiator is on the wrong wall! Having said that I have three tables up here - a 5ft by 3ft (my main table), one that is 44” by 26” (my modelling desk) and a small 3ft by 3ft fold up table which gets moved around a lot! These are all the same height so I could drop a board from table to table if the need arose.

Luckily no one else comes up here so I can leave things set up as required.

That sounds a really good idea! Doubt the missus would let me do that with the dining table. But I could try 😉

It is rather strange in that I will be in the position of having the board game (once I get it) taking up more space than the resulting games using the WoFun collection! Depending on what rules I use the gaming table will only be around 4ft by 3ft at the largest!

I would not attempt to use our dining table as the risk of interruption and disturbance by the feline members of the house (we have two) would be too great!