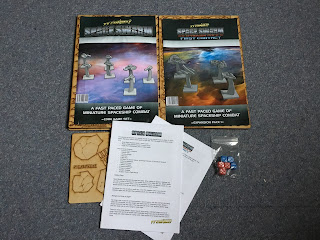 Something a little different but at a bargain price - check out the link below to the website for some better pictures. The company also has a pretty good range of MDF scenery as well

Work on the ACW ships is moving along and four of the eight are ready to be assembled, flagged and varnished. They will be up on the blog when they are all finished and I may even hold a mini review of the entire collection but that will for a later post.

In the meantime though, I picked up a copy of TT Combat Space Swarm and the first expansion set that goes with it. This is something I have had an eye on for sometime and at just over £13 for the two sets including postage represents a real bargain. The game is starship combat using two fleets of MDF spaceships with the largest types being around 2” long. You get two fleets in each set, each of 12 ships, and these are in three sizes, frigates, cruisers and battleships. the base game comes with the following:

I reckon that represents outstanding value and the rules themselves look good fun. One of the problems I have always had with space starship style battles is that the models seem to get bigger and bigger so having fleets where the largest ship - the battleship mentioned above - is only two inches long and also that he game is designed to played on a 2ft square area certainly gets my vote. I may well slip this little ‘Ooh shiney’ mini project in once the ACW ships are finished. 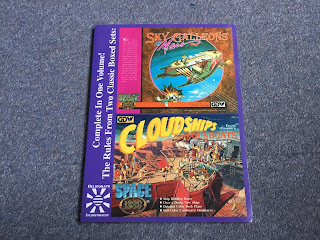 Something else I have been thinking about is revisiting Frank Chadwick’s Victorian Science Fiction Space 1889 universe - specifically Sky Galleons of Mars. I have a hankering for some Colonial 15mm set on Mars and with some scratch built fliers - occasioned by having just watched the Disney John Carter film and reading Edgar Rice Burroughs books of the same. Warrior Miniatures have just launched a rather nice looking 15mm Barsoomian range with some British Victorian infantry included. The Portable Victorian Science Fiction Wargame even....Who knows?

Given my current liking for all things MDF it did not take a great leap of the imagination to come up with the Martian Defence Force as being a good name for a Victorian garrison on the red planet....

Well it tickled me anyway.

I reckon the MDF's arch enemies would be the Formicans...😄
Cheers David!

You mightbe interested in the large 15mm VSF range - Martian Empires that I developed over a number of years. it is available from Fighting15s now:

I will take a look at the website. - many thanks for the link. I would only be looking at this from a low level - say 50 models a side - and it is something that would be well down the running order but I really like the idea of some scratch built sky galleons....