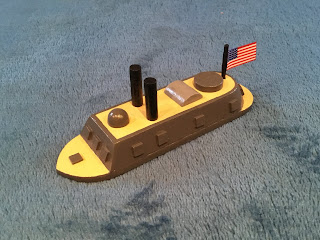 U.S.S. Essex. The domed cupola came from a Mastermind set with the peg snipped off. I use the black and white pegs from the same game for hit markers.

Some excellent news. My Warbases order is in the post so work next week can resume with more paddle steamers. The Union timberclads and the U.S.S. Benton will have to wait a while as that particular order is now in the Warbases queue. No problem there - I have plenty of other stuff to be getting on with! 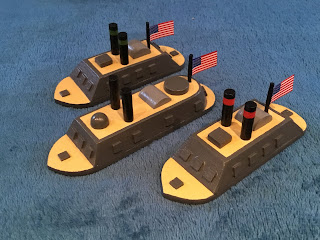 U.S.S. Louisville at the top, U.S.S. Essex in the centre and the U.S.S. Carondelet at the bottom - soon to be joined by the U.S.S. Benton 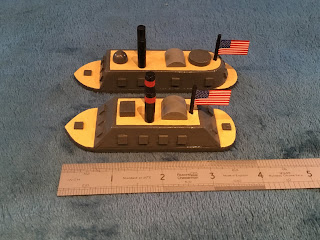 The U.S.S. Essex was around twenty five feet longer than the City class but looked a whole lot longer, due in part, to the length of the casemate

I finished the U.S.S. Essex and am rather pleased with how she turned out, especially with the curved casemate. She looks quite intimidating but in reality was relatively lightly armoured and certainly under gunned. For all that she saw plenty of action. She will operate alongside the pair of City class gunboats - U.S.S. Carondelet (red funnel bands) and the U.S.S. Louisville (green funnel bands) - and the great bulk of the U.S.S. Benton when she is built.

On with the next batch - and the small matter of a campaign to fight!

Many thanks old chap! It is all coming together nicely.

They look excellent! Maybe this year I'll get my ironclad project off the ground (our onto the water)

Thank you old chap! I realised last night that the reason the original smaller versions did not hang around was simply because I so got so caught up with building them that the painting lagged further and further behind until I really did not fancy it! Painting these as I have built them has worked far better.

If you have a hankering for an Ironclad project then go for it - it is great fun to fight!