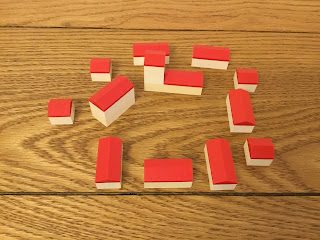 All in all its just another brick in the hall (actually the lounge but you get the drift....)

The weekend just gone saw the whole household sorting out for disposal the Lego collection that my grandson had built up over successive birthdays and Christmases. Going back to when I was a boy I really used to like building stuff with Lego - long before they started with all the ‘one shot’ style of model. One used to get a selection f basic bricks and a manual with several different models to build from the available selection. It will come as no surprise that I regularly used to build all manner of military stuff - tanks, aircraft and similar - in fact my very first wargames block armies used Lego bricks for units. The eight stud brick was my standard infantry unit (organised in units of four blocks), the six stud brick (with a two stud brick on the top) was a cavalry squadron (three of these for a regiment) and artillery was a two stud brick with two single stud gunners and were organised in pairs - I suspect that all looks achingly familiar but bear in mind this was going back to around 1970 and long before Command and Colours!

Anyway, back to today and the sort out of my grandson’s collection. A large chunk of it has now moved on - mostly the aforementioned kits, a selection of Star Wars, Marvel Avengers and DC Comic sets - but there was a large box of basic bricks. I had a rummage through the box with a feeling of nostalgia for times gone by when I remembered something I used to do for terrain ‘back in the day’. I quickly knocked the few items you see above into a small village and so decided, as much for old times sake as for anything, I set these to one side for future use with my (wooden) block armies.

I will not paint them but I will fashion some doors and windows to finish them off - probably using pieces cut from sticky labels and coloured in appropriately. Simple? Yes. Inexpensive? Again yes with the added bonus that these will work very nicely with 3mm figures or in conjunction with my ship models (apologies for the red roofing in evidence!).

Forts, castles, city walls, the Maginot Line, aircraft, battleships, towns, rockets, pyramids even.....Are you like me, an old grump, when it comes to Lego? A typical conversation would go something like this:
"It used to be better for the imagination back in my day because you had to come up with a design yourself rather than follow a pre-set plan with all the specialised 'components'."
"Ah, but you can use these Star Wars kits to make other things as well."
"That's the theory, but give a child this kit and that's what it will want to make. Stunts the imagination."

To me those little Lego buildings look perfect as they are! I think the roof tiles were the first pieces I had that weren't just bricks. With a bit of imagination you could make anything out of the basic bricks (showing my age again!)

Guilty as charged! A telling comment about the current Lego ‘model’ phenomena was made by my grandson after I had helped him build a Star Wars Droid Gunship. It was a lovely model complete with a light sabre wielding Yoda, Tarful the Wookie and two trade federation battle droids. He said “what can I do with it now?” What indeed, aside from playing something Star Wars related it was finished with and after a short while consigned to the cupboard along with all the other Lego Models.

Lego models are great fun to build but like you I really used to enjoy using my imagination to make all manner of things as the mood took me.

I think it is a shame.

So many hours and days of fun playing with Lego bricks as a kid, with your imagination the only limiting factor, plus of course the bricks you had to hand! The wheeled bricks were brilliant as they worked really well through mud, dust and sand. Just don't stand on them with bare feet though...

I will stick a few labels on for effect but that will be it. I have used cheap, imitation Lego bricks (Megablocks as I recall) for various modelling projects in the past and these were painted and hacked about quite happily - I would not do that with Lego though - as the plastic they were made from was very similar to kit plastic. The little studs on the top could be cut off with a saw and used as large rivet heads.

I can safely say that Lego has had a significant role in my wargames journey for sure!

Absolutely! I can still remember how I made 4 engined bombers and tanks using elastic bands for tracks.....sigh.....happy days!

These look lovely David...
Can you even get Lego like that now?

I believe you can although these styles of brick do not appear as common as back in the day. Very simple lines but with a paint job if you were so inclined or the aforementioned sticker option they would come very nicely indeed.

You will probably not be surprised to learn that I have a cunning plan for these....Also for the old favourite of Monopoly houses and hotels.....