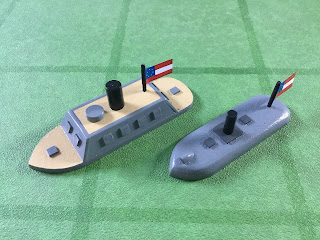 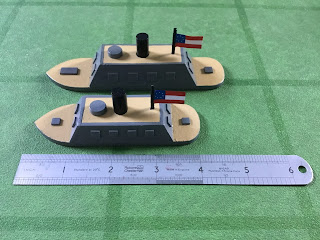 Previously the sole representative of the type was the model at the top of the picture. It is large, too large really, but will still serve when I need a monster ironclad! 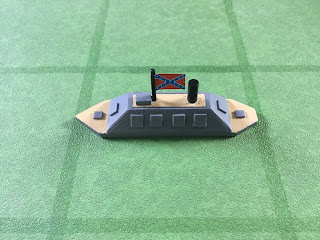 The revised C.S.S. Georgia. The hull is slightly longer than previously and based on the original plans the fore and aft deck angles start further on from the casemate rather than at the edges. The result is far better balanced looking. 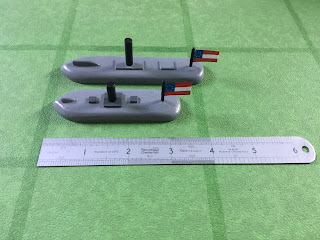 The top model was my original ‘proof of concept’ experiment with the Dremel. The smaller of the two is far better looking, has more detail and is closer in scale with the rest of the collection 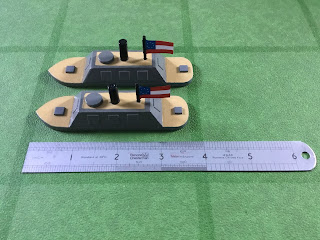 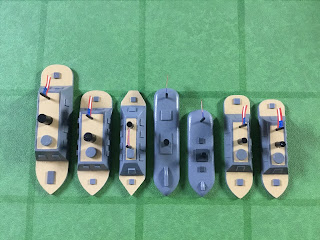 A top down view to give you a better idea of sizing.

Done. Finished. Game over. This phase of the ACW building project has now ended! The tweaks have been, well, tweaked and the two new builds are ready to take their places in the Confederate order of battle. I feel relieved to have gotten to this stage as the collection is nicely rounded and indeed, if I stopped here then I would still many hours of enjoyment from what there is. I shall be adding more models and the appropriate lists are being made. For now though, I want to spend some time getting the rules into order as well as giving the man cave a long overdue spring clean. 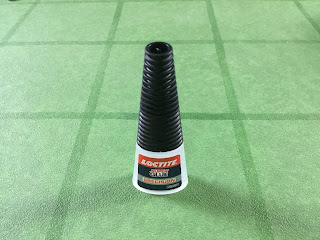 An unsung but vital part of my building project!

Before closing I would like give a mention to a very special part of this project. The commitment to the cause was absolute and the service provided gallantly lasted from the first model until the last when, due to having exhausted their supply, it expired.

I am of course referring to the tube of Loctite super glue that has lasted me throughout the building process of 28 models without drying out!

Gone but not forgotten....

Those new versions do look superb and are well worth the effort and, most importantly, you are happy with them:). Now onto the terrain side of things... ;)

Thank you old chap! I am pleased I reworked the models that were bothering me - it now feels like I have gotten them to how I set out to build them. It feels like a natural break in the project which keeps my head clear for the next phase - which will include terrain nut not o the scale of Vicksburg!

Thank you old chap! They have an old school charm about them and are pretty straightforward to build. I enjoyed making them and using them so win win I reckon!