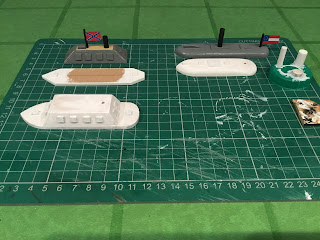 It really did not take long to get these up to this stage. I am very pleased with the revised C.S.S. Manassas and my trusty Dremel has done it again!

This will be the penultimate post in this sequence. I spent some time today working on the last three models of the refurbishment phase and I have to say that not only am I really pleased that I have spent the time doing so but also that I am delighted at how the models have turned out.

The new version of C.S.S. Manassas looks far better - both in respect of size but also of detailing - you can see her alongside the original test version.

The modified hull form for the C.S.S.Georgia looks a whole better proportioned - the plain part of the hull will not be painted as that is where the casemate will be located.

The additional ironclad for the Confederates looks better proportioned as the ‘star turn’ of a scenario rather than the current incumbent that will instead be saved for special occasions due to her size.

This means that the collection will now sit at 25 models but is in a far better shape than previously. The minor tweaks and additional build have made a whole lot of difference to the overall look of the thing and so it really feels more like an end of sorts.

Once the above are painted (which I shall finish tomorrow) I can draw a line under this phase and spend some time working on the rules and planning the terrain items I am going to build - a well as making plans for the final batch of ships.

Sounds like a project that won't let you go! But I can relate to having models that don't 'look' right. That is why I simply 'had' to make some proper 'City Class' US gunboats instead of the 'USS Watusi' - but the latter was too good to throw away... Same thing with the Turkish light cruiser 'Hamidiye' and the Greek ironclad battleship 'Hydra'. The former I could fix, the latter, even a fixes didn't quite fix, but will be retained, and the sister vessel done ... erm ... properly.
Cheers,
Ion.

I can honestly say that this project has given me such a lot of fun in so many different ways but you are absolutely right about models (or figures) that do not look ‘right’ - whatever that is! All I know is that I am really glad I took the decision to rework a few items - my artistic sensibilities (such as they are....) are now feeling warm and fuzzy.