Intermission: The End of Act One 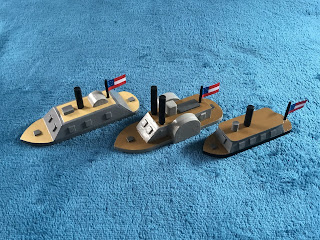 For the Confederates we have the C.S.S. Missouri, a generic side wheel ram and the C.S.S. Little Rebel - I have yet to assign new names to these bearing in mind they are ‘based upon’ rather than strictly accurate. 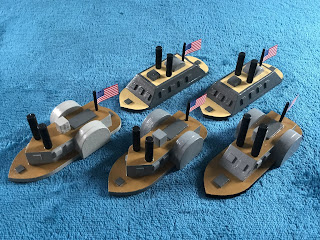 The Union has gained a pair of City class gunboats, a generic side wheeler and a pair of Ellet Rams - these also need to be christened.

I have finished the current batch of models for my ACW naval project and whilst it is an end of sorts it is also a kind of a beginning in that I now have a much clearer idea of the final shape of the collection. I am really pleased with how this has turned out so far and with a few little tweaks it will where I want it to be.

The collection has kind of grown beyond the original plan and it will, in its final version, be roughly twice the size I intended but there is a logic behind it, aside from the fact I have really enjoyed making the models! There were a number of facets to the naval side of  the Civil War - the actions on the rivers, the coastal war and the fighting on the high seas in pursuit of Confederate commerce raiders and blockade runners. There are different types of ships in use from purpose built warships to converted civilian vessels pressed into service, all of which played their part. To be truly representative a collection needs to reflect this variety or rather when you are in my world it certainly does!

My rules and gaming space (usually a 5ft by 3ft) works best with around a maximum of a dozen ships on the table. So having two fleets of a dozen ships each means that I have a workable surplus of models to work with which translates to table top variety. Were it not for the diversity of types in use - from river paddle steamers to ocean going ironclads - a dozen models per side would be fine but I am looking at broader horizons. Essentially this means I need to have ships for use in various theatres - from the swampy bayous to the high seas via the coast.

Suddenly the twelve ship fleet seems a little on the modest side so I will need to add some more! I reckon another dozen models will ‘scratch the itch’ but the important thing is that I do not need to hurry to build them so in a sense the pressure is off to a degree.

Just because I can below are pictures of both fleets. 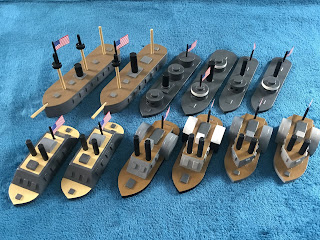 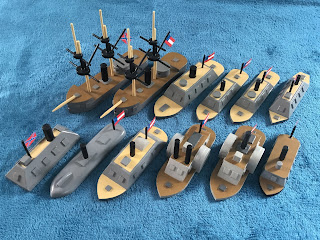 There are a few models that are going to be refurbished and in one case replaced. The two Confederate casemate ironclads are going to have the aft deck trimmed. I am also thinking about the C.S.S. Georgia (top right) as I have never been keen on the hull for this. I will also be making another C.S.S.Manassas as with the best will in the world the model I have is too large although in my defence it was only an experiment - a test bed for my Dremel.

I have really enjoyed building and using these models and am sure that I will get further use of them in the future. For now though, I need to finish the rules and take care of some terrain ideas I have as well as planning the next phase.

All good fun though!

Great inspiration here as I'm about to build the gun boats of shiloh for the new epic miniatures.

Thank you old chap! If you mean the new Warlord figures then your models will look very impressive - and will certainly be a lot larger than mine!

I will be interested to see them when they are ready!

Two lovely looking fleets David...
I’m looking forward to seeing what you do with the terrain.

Thank you old chap! I have a few ideas for terrain and am keen to build a fort. I did toy with the idea of using some of the Peter Pig 1:600th terrain but have decided to make it myself. There are another dozen ships to build as well although I am not going to rush them - in truth I have yet to finalise the list!

How the fleets have grown. Although 'based on' it is clear what they represent and they look sturdy for playing with. I find it interesting how wargamers always 'need':-) Looking forward to hearing how the rules are modified and seeing the terrain building. Best wishes. Jim

Oh I say vicar! Those are really rather lovely:)

It really is just a case of covering all the bases really and for sure a collection of ACW ships would not be anywhere near as larger as say, a Royal Navy fleet for the Great War.

The rules are more or less ready from the perspective of the game mechanisms but they need to be rewritten into something a little more reader friendly.

Still thinking about terrain but watch this space!

Thank you old chap! I am rather pleased with most of them but there are a few little irritants that I want to address.....

It certainly has been and will continue to be so for a while yet!