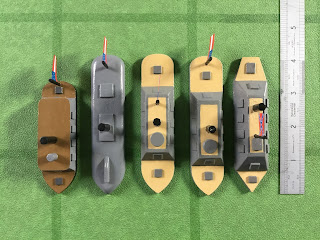 Only the model on the left will be unscathed - she is only there as a guide as to the size I will be making the new version of the C.S.S. Manassas.

By no stretch of the imagination could I be described as a perfectionist. I am though, a great believer in the old saying that ‘if it looks right then it probably is’ (if indeed that even is an old saying!). There are some models in the Confederate fleet that have been putting a burr under the proverbial saddle so to speak for some time - and this is situation that I will need to address.

Working from the left of the picture above the second ship along is the C.S.S. Manassas. I built her very much as an experiment as I was trying out my Dremel. I am very pleased with the end result but she is too long. Ideally she needs to be about the same size as the smaller model on the left. I thought about refurbishing the existing model which would mean cutting the hull down by around 3/4” and then shaping it. The problem with that is that I have hull detailing that would then be too close to the stern as well as a funnel that is too tall. On balance it would be easier to build a new model which is probably what I shall do.

The two ironclads next to the C.S.S. Manassas both have the same problem but fortunately it is relatively easy to fix with care. In each case there is too much aft hull so the models look unbalanced. This is easily rectified by trimming the aft hull. It will mean that the two ships will be of different lengths - the ship with the flag on her stern needs rather more trimming than the other. They both need cutting back and then painting (in one case a new flagstaff will be needed) but other than that it will be easy enough to do.

The final model - C.S.S. Georgia - I have really grown to dislike. The problem is that the forward portion of the casemate intrudes too far onto the foredeck. I am tempted to remove the casemate and refix it to a larger hull template. This will be fiddly as my casemates are not designed to be readily removed! The alternative is to scrap it an build a replacement which on balance may prove be the easier option. 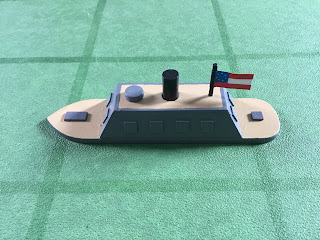 A nice model but too large - currently her casemate towers over the main deck of the U.S.S. New Ironsides! She will be used a Confederate super ironclad as required.

Finally, I need to build a sensibly proportioned large ironclad as the current largest model is too big compared to the others. It is not so much the length of the hull it is the height of the casemate.

Now this may seem like nitpicking on my part but I am pretty sure that all of us can relate to something in our respective collections that just does not sit right and jars on the eye. I now have two models to be refurbished, two to build from scratch and one that may be able to be saved. None of this will be problematic and certainly the models I have are good enough to use but this little ‘tweak’ will make all the difference. 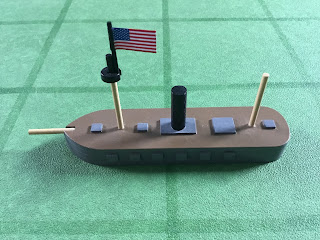 The U.S.S. Galena. Now that I can shape hull sides I will make a better version of her with her distinctive curves. The above can be repurposed and yes, I have a cunning plan in mind....

From the Union side the only model I have any issue with now is the one based on the U.S.S. Galena. Historically she had a very pronounced curve to her hull sides which I can now model using the Dremel. There is no hurry for this though and in any event, if needs be the model I have can always be repurposed.

Hi David. This sounds like what Max Foy calls ‘creeping elegance’. The urge many of us have to make improvements in what we have. Turning something perfectly acceptable into something more perfect. I guess if you get itch you have to scratch it.

Your existing models look fine to me ... but I can understand why you want to makes the changes. I’m sure that the ‘new’ models will look even better rpthan the existing ones, and that you’ll get many hours of enjoyment using them.

They are only small aberrations but as you rightly say - if you get that it’s hard then you have to scratch it! The two ships that needed shortening have been finished and look so much better for it. I was even able to get the casemate off the C.S.S. Georgia with little difficulty. The new C.S.S Manassas is under way as is the other ironclad so by the close of play tomorrow all will be done!

I have made the changes and they look a whole better balanced! I want to get many hours out of them so this was something that would have continued to irritate me but now is far more aesthetically pleasing.

The itch has been scratched!

They are fine as they are but you know what it is like when you see something that you think is not quite right - you have to do something about it!

In my defence the first models I made for this project were rather haphazardly planned and more or less thrown together. Now that the construction process has been refined I am better placed to be a little more selective.