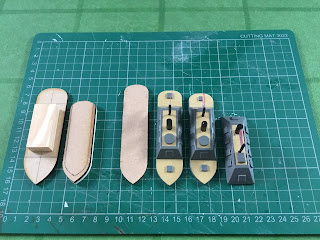 The story so far. The two ironclads in the centre have been trimmed from their original length (note the plain template alongside as a comparison) and after a fresh lick of paint now look far better balanced. The C.S.S. Georgia is now in her floating battery configuration and I still need to think about the hull form. On the left are the hulls of the new ironclad and the new C.S.S. Manassas currently under construction.

With a certain amount of trepidation I set to work with the previously discussed modifications and construction plans for the ACW naval project. The two ironclads that were being shortened - by 1/4” and a  1/2” respectively worked out really nicely and I so pleased that I did this - the blank hull template alongside then shows the original length. The models now look far better balanced than previously and being different sizes is no bad thing either. Most Confederate ironclads were ‘one offs’ so at least the size differential is historically accurate even it the models are not!

Removing the casemate from the C.S.S. Georgia was not too difficult but had to be tackled very carefully. I was concerned about how well the casemate would hold up under pressure but given the quantity of glue used on the inside it proved to be surprisingly robust!

You can also see the new hull size for the C.S.S. Manassas and the other larger ironclad is also under way. I am still undecided about the hull for C.S.S. Georgia so will think about that once the others are taken care of.

I have to say that I feel a whole lot comfortable with the models now so it was definitely worth spending some time on them.