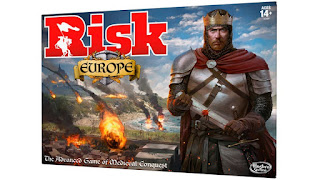 I suppose this could be described as an 'Ooh Shiny' moment but then that would not be the first time (nor the last if truth be told) for me! I am rather fond of Risk although to be honest it is more to do with the components than the game itself.  Recent years have seen a myriad variants of this game produced ranging from Star Wars to the Walking Dead via Tolkien and even the Game of Thrones. For the most part they all tended to follow the original game with genre specific differences or flavour added. I noticed the above variant a couple of years ago and was mightily intrigued at the time - but not enough to splash the then £40 being asked for it. Anyway, to cut a long story short I came across a couple of sets at a price I could not refuse and so am now the proud owner of the same. 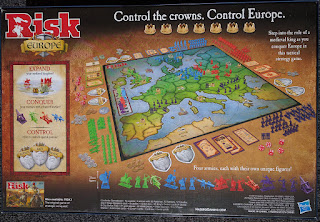 What on earth for?

Well, the figures are very nice to start with and rather unusually for a Risk game there are four quite different figures mixes. A quick glance at the pictures will show that they have produced for each army very generic looking types for Frankish, Scandinavian, Eastern Europe and Euro-Asiatic types at around the 22mm scale in a softish plastic. Each army consists of 12 cavalry, 12 archers and 35 foot soldiers plus 4 siege engines.

The all important figures and raison d'etre for buying it the first place...
﻿

The game itself is card driven and is a lot more subtle than the 'classic' version of Risk as well as having a combat system that uses an order of precedence to determine outcomes - which probably explains why there are so many basic foot soldiers or ballista/trebuchet fodder....

I acquired two sets of this game (for rather less than half the price I originally saw it for sale although I believe it has come down in price) so am now placed in terms of medieval figures for use at some point. Essentially I could field a number of DBA/HOTTs armies or could even use then for Dragon/Lion Rampant. I will try to get some close up pictures of the figures so you can see what hey are like.

I do not consider myself to be medievalist to any great extent although I am interested in the crusades. I have also been wary of painting figures for the period but reckon these would be a likely candidate for my modest efforts at some point. Certainly from a cost perspective this has been a coup and if I am honest is probably the only way I would have tackled this period.

I also noticed that last month the number of blog posts I wrote actually got into double figures for the first time since August 2014....
Posted by David Crook at 08:59

I see there is a plan
Rather than the inability to say no?
;)

Probably yes to both points if truth be told! I am thinking that would serve as a quick and easy option for DBA/HOTT or anything 'Rampant' based. I rather like the idea of using them for fantasy gaming as well.

It will not happen anytime soon though - too many ships at the head of the queue!