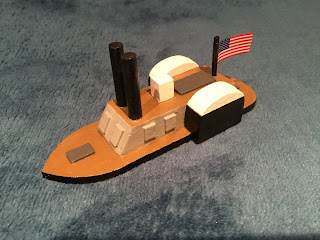 First of the Union paddle steamers.... 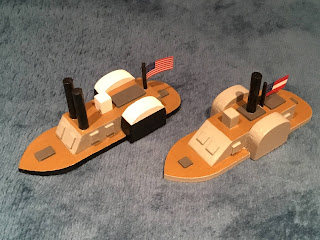 ....in company with the first of the Confederates. 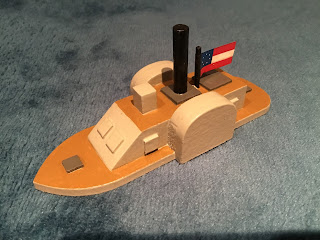 Ready for action along the rivers and in the swampy bayous.

Slightly ahead of schedule the final two completed models for the ACW project are now completed (and with flags!). I have a change on mind about these as originally I was going to build half a dozen or so paddle steamers and purposely leave them I flagged so that I could use them for whichever side needed them. Instead I am going to flag them and as a result each side will now have three side wheelers. I may pop in a couple of sternwheelers at some point but have not decided yet.

These two are definitely gunboat looking but are not consciously modelled on any particular vessel. They are representative of the types pressed into service by both sides and used along the rivers and in the swampy bayous.

I have gone as far as I can for the moment with the ACW ships although I have a further four models under construction. Warbases are back in action on the custom order front next week so I can get the parts I need to finish these as well as those for the Russo Turkish collection.

I have now built and completed 15 models for the ACW and have a further 9 to make to complete the collection.

For now though, my thoughts need to turn to the impending action I am planning to run and set along the approached to the Confederate stronghold of Immobile Bay.

Those are very nice David and I think a stern paddle steamer would be rather lovely as and when time allows. Really looking forward to seeing these in action:)

I would like to add a couple of sternwheelers at some point but I want to get the other models finished first. What is left to do is pretty straightforward once I have the parts I need but a stern wheeler I will need to think about how best to build it.

Action will follow soon - I am finalising the details for the scenario.

More of these to come and as for the similarity between the model and the U.S.S.Lafayette - you may think that....I couldn’t possibly comment...:-)