Where we are or the state of the Union 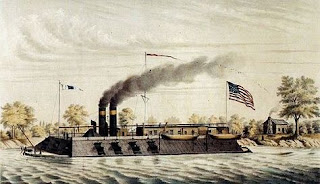 One of ‘Pook’s Turtles’ in action

As I have now reached the point where I can go no further with the models for both the ACW and the Russo Turkish War I figured it would a good point to take stock and think about the next phase of the projects in more detail. In truth I could push on by improvising the pieces I need but as these are being cut by Warbases I may as well wait and make construction that little bit easier!

For the ACW the plan is to build another six side wheel paddle steamers - 3 for each side - of which four are under construction and awaiting parts from Warbases (which have now been ordered) to finish. There will be a couple of ‘Pook’s Turtles’ in the mix and then some screw gunboat types. The eagle-eyed amongst you will no doubt have noticed that his will take me beyond the original estimate of 24 models. This is not a problem as the figure of 24 models was always going to be the core of the collection - specific models could then be added as and when required. I like the idea of a couple stern wheelers but need to get my head around the rear wheel and how best to represent it.

For the Russo Turkish War I have four gunboats to build for the Turks along with six ironclads. With the two monitors already built that will give me twelve Turkish ships. For the Russians I shall be building two gunboats, six spar torpedo boats, three armed merchant types and of course a couple of circular gunboats - simply because I can! I rather like the idea of adding some later ironclads in to the Russian fleet but will have to see.

For the moment though I need to focus on getting the models on the table so over the course of the next few days battle will be joined.

In respect of the games I shall be running going forwards I have decided to work to the following format.

There will be three blog posts. The first will cover the background and will set the scene. The second will be the game itself whilst the third will cover the after action ‘wash up’ with thoughts on the rules and similar.

I want to adopt this approach as it means I can focus on each part in more detail - the purple prose can run freely!

Your naval collection is coming along rather nicely David, with the total higher than I thought it was, so you have been a busy bee! Breaking down the AAR into three sections is a neat idea and look forward to reading all about the planned game:)

It is coming along and the best news of all is that Warbases are now back in the custom orders business! The models I have left to build for the ACW collection will be really simple to put together now that I have the construction technique dialled in. Painting is what will take the time.

Three part AARs make a lot more sense for me in that I can spend more time getting them done meaning that he end result will be more enjoyable.