My Effort has been Flagging.... 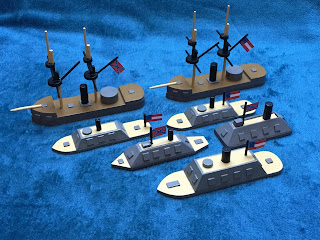 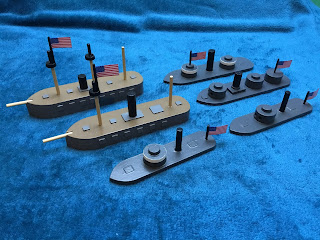 ....and their Union counterparts.

Did you see what I did there? My effort has been flagging and so the current batch of ACW models have been finished off with the small but oh so important addition of their respective flags.

I think I mentioned that Tony at Brigade Models (a throughly nice chap by the way) produced the flags for me and has done a really cracking job on them. As ever with this project I have taken more than a few historical liberties as to the location of the flags etc on the actual models. I mentioned about the Confederate naval ensign yesterday - I have deliberately avoided the later version - but for the Union it was straightforward enough. It was quite obvious from my research that monitors and casemate ironclads, being usually somewhat deficient in the ‘masts and spars’ department tended to put flagstaffs pretty much anywhere there was some room and seemingly almost as an afterthought. Hence the rather random distribution of these on the models I have built.

The flags themselves are printed on self adhesive labels and are of the ‘wrap around’ variety. All I needed to do was to cut them out, touch in the edges using a permanent marker (this was a pain when I got the US red stripes!), paint the flagstaff section to match the staff it was going on, drill out the holes (VERY carefully!) and fix everything together. The paper used to print the flags on takes paint and satin varnish well but only after any pen or brushwork has thoroughly dried. I had a very slight ‘bleed’ from the red into the white of one of the Confederate naval ensigns but it was nothing that a quick touch up couldn’t put right. The flags themselves also do not take flexing very well so an early attempt to have then flapping in the breeze had to be abandoned as the colour ‘cracks’ leaving the white of the paper showing through. This means they are rather ‘stiff’ looking but having said that they fit in nicely with the wooden appearance of the models themselves so from an aesthetic perspective it has worked out rather well.

I have worked out what the remaining dozen models are that I shall be building for the ACW collection and it means that that at the end I will have both an inland and coastal style set up.

The next time you will see any of the above it will be in action as plans are currently well advanced on the scenario for my next game.

Thank you old chap! If I have learned anything from this it is to make sure that you add the flags when you finish the model!

They will be in action shortly....

Very clever on the post title David! They do look good with flags as mentioned before:)

Cheers old chap! The next time you see these they will be in action.

I should also have the next two ready as well.

The models look terrific!
I have a fondness for Union riverine ships. If you're ever in Vicksburg, MS, the National Park there has a display where you can go onboard the USS Cairo, which was recovered from the river. Enough of the timbers have survived that you get a good sense of the size of the ship. The July day I was there, it was suffocatingly hot and and humid. Goodness knows what it would have been like to live, work, and fight belowdecks on one of those things.
Cheers and blessings,

I would love to go there expressly for that reason! I shall be building a pair of ‘Pook’s Turtles’ in the next batch of models.

The ironclads and gunboats on the river (and including the monitors) were apparently horrible places to live on and in the heat it must have been awful.

I recall seeing a picture of the Cairo’s pilot house after it had been raised with a Confederate flag on it. When this pointed out as being incorrect the answer was something along the lines of ‘Well she’s ours now!’