Square Dancing and the Joy of Hex? 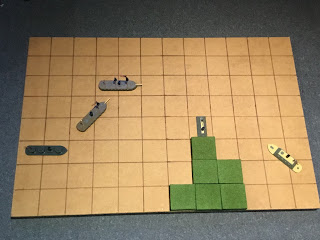 Rough and ready and posed for this blog post. The actual refight added the second board which is the colour of those hills you see at the bottom of the picture. I also used the wrong Monitor....

It is funny how a chance comment can set in motion a whole chain of events and trigger some very enjoyable memories. In a recent exchange of emails with Bob Cordery the subject of using a square grid for naval games came up - in passing, almost as a throwaway comment even. I should have known better as this proved to be the catch that unravelled a whole range of ideas and thoughts! I am sure I am not the first one that this happens to though - and I certainly will not be the last!

I should perhaps put all this into context. Many years ago I played a number of games of the old Battleline  - Ship O’ the Line age of sail naval rules. These were designed by S. Craig Taylor Jnr (of Flat Top, Air Force and Wooden Ships and Iron Men fame - one of my all time favourite game designers) and made use of a square grid with most ship models occupying two squares. As I recall we had some cracking games with these rules and to this day I would have no hesitation in using them again. 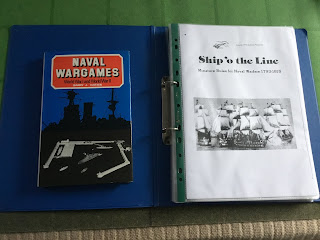 Blasts from the past but cracking reads all the same. The age of sail rules also include a supplement for fighting naval battles in the age of the Spanish Armada

Moving forwards in time the book Naval Wargames - World War 1 and World War 2 by Barry J. Carter also made use of a square playing area. Historically Fred Jane’s naval wargame also used squares and I am sure there are several others I have not mentioned.

Using a square grid offers the ability to use 8 directions for movement rather than 6 - natural compass points if you like - and so would seem to be a better option. Certainly producing a square grid is a darned sight easier than a hexed version as I know to my cost only too well!

There are a few other factors to consider. The old chestnut of diagonal movement. If one counts squares diagonally then after a while in real terms a greater distance is covered than if measured orthogonally. This is easy to solve. When measuring diagonally simply count every second square twice, for example 1, 2 3, 4, 5 6 etc.

You may recall I had mistakenly decided that the maximum size of my ship models would be 5” (not allowing for the bowsprit) as I thought that the grid squares for my Hammerin’ Iron gaming mat were 5.5” across the flat sides whereas they are 4.5” - very much a schoolboy error on my part, I should have checked first! I was pondering how to get around this and came to the conclusion that a larger hex would be needed. This in turn raised another problem. It would mean that there would be fewer hexes in the playing area and therefore less ‘sea room’. If I am honest I believe that the size of gaming mat I have (this is 5ft by 3ft) is as large as I would go as it fits my gaming table nicely but I as feeling a little uneasy about increasing the hex size.

It was while I was wrestling with this that the subject of a square grid came up and with it the feasibility of using a smaller grid but with ship models occupying two hexes/squares.

Let me hypothesise. If I were to use, for example, a 3” grid area (I shall refer to these as such going forwards as I am looking at both hexed and squared options) it would mean that one of my ship models would occupy two such spaces. Movement and measuring of ranges would be effectively halved as one would only be using single grid areas to do so.

This is a big deal because it means that suddenly the playing area (by that I mean the gridded playing surface) will appear a whole lot bigger. As a result models will cover less of the table when moving and firing ranges can be employed that are more closely relative to ship speeds. Using the larger grid area size meant that ships got to grips far sooner and also crucially that any manoeuvring was more restricted by space.

I think that the key lesson here is that if one is using a grid to fight naval battles then having smaller grid areas will increase the manoeuvring space for the ships, even if they are occupying two such areas.

Bob casually asked if I would run the game again using a square grid. So I did.

After some hasty improvisations to the rules draft I ran the game using the two tables I have (one of which  is above - the other is covered in grass mat so sadly no ‘in action’ pictures, just the posed shot you see). The playing surface used 3” squares and when set up the grid measured 12 x 16 or 4ft by 3ft if you prefer. This was the same depth as for the original game but a foot shorter.

I will not give a blow by blow account but the effect of using a smaller grid area was outstanding! Despite the models covering less with their moves they had more room to manoeuvre as the table seemed to open out quite dramatically. I will say no more other than there was a definite result to the action and that in terms of material losses the honours were even....

So what does all this mean then? From a practical perspective I am now committed to the use of  two smaller grid areas for the models as the gaming advantages for me far outweigh using a single, larger one. I would qualify this by adding that this option is what suits my playing area and so gamers with access to more space may not agree. In my man cave I could (and on occasions have) deploy a 6ft by 4ft table but I routinely use my 5ft by 3ft.

I will need to make some adjustments to the draft of the rules I am working on - nothing major, just some additional notes around firing arcs and turning. I will also need to ensure that they are suitable for both square and hexed grid areas and also if players wish to use a single grid area for a model rather than two.

The only other choice I need to make for my own games is to use hexes or squares although the latter is looking very appealing for a variety of reasons. It would be easier to make for one thing!

I found that for naval games, and with tot total number of squares moved being limited to let's say 5 per turn, using a "+1 movement when moving straight" or "at most 1 diagonal move allowed" are very elegant rules.

Many thanks for the links and they certainly made for some interesting reading. The method I am going to use works well enough for my purposes and but it was good to see the analysis. For the rules I am using the highest movement distance will be around 8 with half that being the average. Of the ships i used in my recent battle the fastest one moved 5 with two others at 4 and one at 3. All quite manageable. Actually these are around the speeds that we routinely fought the age of sail games using the rules mentioned and subject to the wind strength and direction.

This is intriguing how it has worked out. I would never have thought using two squares rather than one hex would result in more ‘space’. I love discoveries like this.

It is strange to be sure but by effectively cutting the physical movement distance in half the playing area feels a lot larger. I am sold on the idea as the size of my models when measured against the size of playing I use could be problematic otherwise. It would be like fighting a battle using 54mm figures on a coffee table.

The physical aspect has not increased but how I shall be using it has.

There are a lot of things in the pipeline for this project and so I shall keep on using the gas until the meter runs out!

Hi David -
Food for thought there! Some time ago I drew up several hex boards - 2-inch hexes on thin blue card (which is bally hard to flatten, let me tell you!). But 2-inch squares might be the go for my own Turcowaz and Hellenic fleets. Something interesting to investigate!
Cheers,
Ion

I am sold on the ‘two grid area’ idea for the ships I have been building and having more hexes/squares on a given playing area means a little more sea room than otherwise. I am going to square grid a cloth as soon as the fabric pens arrive and am happy that I have made the decision. My models look far better on two 3” squares than they would a single 6”.

I reckon it would work a treat with your Turcowaz and Hellenic fleets and besides, drawing a square grid is a darned sight easier than hexes!

David you have been busy on the naval front, respect!

I have been battling away for sure! The first draft of the rules has been written and is currently being looked at although I need to get some diagrams organised.

The shipbuilding will resume as soon as Warbases get my order ready.