Thoughts around an ACW Naval Rules ‘Mash Up’ 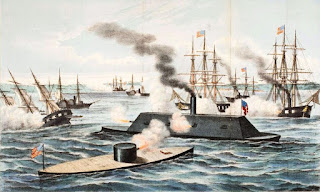 The Battle of Hampton Roads

Back to working from home once again albeit on a part time furloughed basis. As a result I have been otherwise occupied playing catch up but the good news is that I have virtually finished the draft of the ACW naval rules I have been working on. All I need to do is list some ship specs and it will be ready to roll. I am sure that play testing will throw up the odd anomaly or two - but that is the whole point of the exercise after all.

The rules are a proper mush mash as they contain elements from a number of different sets combined with some of my own ideas. I have been very fortunate in that the rule authors have generously allowed me to cherry pick certain ideas and then stick a plaster over the resultant Frankenstein’s monster! Once my testing is complete I will ensure that they are duly acknowledged - my thanks and appreciation are already known to them.

I have certain likes and dislikes about rules and one of the things that I enjoy is the rolling of dice. I also prefer relying on the good old fashioned d6 - which probably means I am a dinosaur but I am happy to be so! The rules do require record keeping but on a simple level. Naval gainers are well used to this in any event and so I have no problem with this. At this stage I do not have a template for a ship record card but it will be easy enough to construct one - the days of relying exclusively on photocopies are a distant memory given that most gamers now have access to a printer - and to print as required.

There is a huge variety of rules available for the period of the ACW afloat so why on earth would anyone want to draft their own? This is a fair question and for me the answer is fairly straightforward. I am very much a ‘skim reader’ in that whilst I tend to devour written material voraciously I am often guilty of missing out points of detail. These missing points tend to be assimilated over time as I repeatedly revisit a given book, ruleset, magazine or whatever. From the gaming perspective - where specific rules are in play - it means that I work far more effectively with rules that are not only simpler but that have the ‘feel factor’ built in. Two examples I can think of represent either end of the complexity factor - one set is very simple and fast playing whilst the other is a lot more detailed. For me the ACW afloat can be fast playing but give the smaller number of ships typically involved it does require a degree of detail to better capture the ‘feel factor’. My rules hopefully fall between the two types mentioned - they are fast playing but they have a degree of detail sufficient commensurate with the speed of execution. Another important factor for me is that by constructing a rule set I know what  am trying to represent from the ground up (or should that be the waterline up?). It all comes down to what I wanted to achieve by writing a rule set for the period which is something like this:

2. Use hexagons/square to regulate movement and firing

I believe I have captured these points but the proof of the pudding will be in the eating or rather the testing to which....

I have a game in mind that I shall be running later this week (be still my beating heart...) and so I need to activate my purple prose gene to get the creative juices flowing. This will be fun and all I will say at this point is that once again the ‘Great Father of Waters’ will continue to be vexed....

This all sounds good to me David. I too love D6 games, especially 2D6 and the bell curve of results they produce. Much better IMHO than a variety of D4, D8 etc. Maybe it's just the feel of them in the hand that I've got used to over the years?

Like most gamers I have a bewildering variety of dice types but it is the good old d6 that is the staple! I am not averse to using the other - decimal dice are very handy - but prefer a ‘fistful of d6’.

I am feeling pretty good about these rules but want to run them a few times first before ‘pulling the trigger’ and rolling them out. It is a fine balancing act meshing elements from different rule sets but as a long time practitioner of the art of improvisation I think I may have nailed it!

the proof of the pudding etc...

You and I are on the same wavelength regarding rules David. Very much looking forward to seeing how your game goes. I like D6 too! Although I am not keen on record keeping it seems to be inevitable for naval games, as you say. Best wishes. Jim

You can't beat a handful of D6's for a fun game! I look forward to seeing a game report in due course.

A fascinating project, keen to see how it develops :)

I very much look forward to hearing more about these.
Kind regards

Over the year i have used all manner of ship record cards - some of which can best be described as unnatural! It is very difficult to avoid some form of record keeping but fortunately for these rules is is very simple!

I have pretty much scoped the scenario and just need to turn it into a game. All being well it should be in a couple of days.

Not giving too much away but there will be ships featuring....(but don’t tell anyone!).

It certainly would not been possible to have gotten this far without your help for which eternal thanks are in order!

Seriously though, using your data was a real game changer for me although I have tweaked a few bits and ‘rebadged’ them (or should that rebodged?).

I will ping you an email later today.

All being well there is not long to go! I am planning the first game for later in the week but will add a few others to try different things out before calling it sufficiently ready.

All sounds good to me Dave!

It is coming together rather nicely so fingers crossed and all that!

I know what you mean about rules. I find the easiest way to remember them now is to write my own! And the briefer the better. Must be my age. Percentage dice are easier to use if you want to calculate odds, but D6 have something about them. Is it familiarity or is there some deeper maths underlying it I wonder.

And to you old chap! Following your progress on the ECW boardgame with deep interest!

I must admit that simple rules that are properly thought out work far better for me these days - as you say, perhaps it is an age thing!

I cannot speak for the deep math theory but given that the humble d6 has been around for quite some time I reckon that our ancestors may have been on to something!