‘Twas a Tale that grew in the telling.... 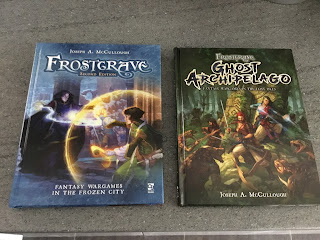 2nd edition Frostgrave and Ghost Archipelago - inspiring in their own right but they have also started a veritable powder trail for yours truly!

I mentioned in my previous posts about wanting to tackle some skirmish style games this year and also how I would go about this. This post will lift the lid on how my thought processes work so be warned - it may be deeply troubling experience!

Frostgrave and Ghost Archipelago are fantasy wargames that involve small numbers of figures and in many ways are almost roleplaying in their approach. They are designed with linked scenarios or mini campaigns in mind which is something I really enjoy as part of my historical gaming. The fact that few figures are involved is a bonus given my well know aversion to painting anything vaguely organic. There are some very nice supporting plastic and metal miniatures and the action is designed to be fought on a small table top - another plus for me as the largest playing area I can comfortably employ is 6ft by 4ft.

Most heroic fantasy tends to be Dark Ages or Medieval based (yes I know this is a sweeping generalisation but it is my thought and I can do what I like in it!) so in my world pretty much anything from the historical world could be used quite happily and indeed, many people do - no doubt to the chagrin of the fantasy figure manufacturers!

(Visions of raiding Gripping Beast, Perry, Fireforge, Conquest or any others for suitable figures - I want to stick to plastic for this series of ideas if I can).

Ghost Archipelago caught my eye simply because of the cover - yes, I am really that shallow - as the chap in the centre screamed ‘Pirate’ at me. Lo and behold, North Star Miniatures have made available a resin conversion kit for the box of 28mm plastic crew figures available that includes pistols, blunderbusses, muskets and Tricorne wearing heads.

(I have history with pirates. I love the idea of gaming something piratical - either naval or on land - and have flirted with the idea on and off over the years).

So, a box of 20 crew figures could potentially be split between the high fantasy of Ghost Archipelago to something Pirate based. The setting - tropical islands if you please - has all manner of potential. By making up a goodly selection of jungle style terrain, perhaps with a beach once could game a whole raft of things.

(Victorian Science Fiction. In the Ghost Archipelago range there are tribal types available and from the historical ranges the Perrys and Victrix both produce Zulus. With a little imagination one could have Pirates fighting tribal types or even throw in some British Colonial infantry for a Colonial or VSF search for a lost city or similar. ACW types marooned by balloon is another idea but my thoughts suddenly moved to the jungles of Madasahatta).

After Madasahatta it is but a hop and skip to WW2 and jungle fighting involving British being chased the full length of Burma or US Marines attempting to winkle Japanese troops out of their bunkers. Moving further on there is the added bonus of Sci Fi Marines exploring a jungle style death world.

The key thing in all of this particular flight of whimsy is that the forces required are very small - my predetermined maximum is 12 figures a side - and the playing area will be no larger than 3ft square. The common thread is the jungle terrain but with one set up look at the gaming potential. I would also look to furnish something similar for an arid, desert style setting which again opens up a whole raft of ideas.

The above is very much a long term series of ideas - some that will see the light of day, others maybe not but the point is that very modest beginnings can have a profound effect on what we do and one idea leads into another. I shall try Frostgrave/Ghost Archipelago but I wonder how many of us acquire a set of rules that leads us off in sometimes quite surprising directions!?

Pirates dropped into a Fantasy setting is a fine idea!

I applaud your ideas for where the game can be portrayed and the various forces that can be deployed. I hope, like me, that you can add colour to your buildings.
Isn't it depressing to see all that black and grey? Did these mighty wizards not like a little colour in their lives? Nor the finer things in life?
Good luck with however you go about it

I like your thinking here David - I just played a couple of fantasy skirmish games a couple of days ago (not Frostgrave but the reason I even have fantasy skirmish figures was originally driven by Frostgrave) and I totally agree - I am finding small scale skirmish games - Western gunfights etc - more appealing and enjoyable at the moment - although I still like the look of the big Napoleonic, AWI or WSS games, the actual action is sometimes less than fulfilling!

I have a history with pirates too - hunting them! :-)

I used to love skirmish games, with Mordheim being a favourite and a set of rules that brought me back to wargaming after many years away. Nowadays I no longer really enjoy these sort of games, much preferring 'big' battles. I will still play them and I think they can be useful as part of a campaign, to reflect some 'petite guerre' on the sidelines etc that may affect the larger actions.

I like the idea of one set of terrain allowing you to play multiple periods and rules on it. This is one reason I've stuck with my largely Northern and Central European terrain, which reduces the pressure on storage and also cost.

Absolutely! I have a few ideas around this to explore in due course so watch this space!

I must confess that the Ghost Archipelago has rather more going for it for me than the frozen city.

It is certainly something for me to think about over the coming months though!

The main reason I want to tackle some skirmish games is that painting a very small number of figures for a game certainly appeals far more than painting an army! It is also something that I can add a back story to to place the action into context. The large battles I can tackle in a variety of ways - WoFun will work well for this, as will my block armies - but the smaller scale stuff will be fun.

In my world painting two dozen 28mm figures would be fun and above all achievable and I have a number of ideas I want to play around with.

Not to mention international talk like a pirate day - belike a marlin spike else me hearty!

Hope all is well!

Skirmishes are ideal for the reasons you mentioned but would certainly not be the sole form of gaming for myself either - I also rather like the idea of large battles and using the block armies enable me to do just that.

I reckon I could get my generic jungle style terrain (when ready) in a couple of box files which is fine and does not take up a too much space. The same would apply for my desert pieces.