“Pook’s Turtles’ and the C.S.S. Missouri 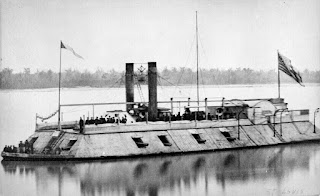 A city class gunboat - in this case the Baron de Kalb 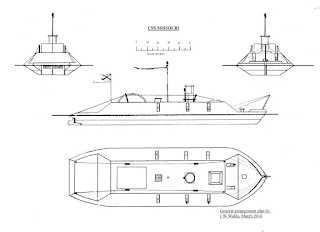 A plan of C.S.S. Missouri. The overall shape is very similar to that the of the city class gunboat so that is all the excuse I need!

Part one of my three part game report has been drafted and is merely waiting for me to colour in the map! I wanted to use this so that the action can be seen in geographical context as it is quite important fo the scenario. I hope to get this finished this evening to post either later today or, more likely, in the morning.

Warbases have contacted me so they are on the case with my bits and pieces which is great news. In the meantime I have started work on a further three models all of which will be built identically up to the fitting out stage.

I am building two of ‘Pook’s Turtles’ - the city class gunboat - and also the C.S.S. Missouri which overall looks pretty similar in shape and profile. True she only has a single funnel and mounts rather less artillery than the Union vessels but I am building her anyway. The finished model will look quite different with the paint job in any event but the core construction - the hull and casemate will be the same.

These three models, together with the six planned paddle steamers will be the lot for this phase of the ACW project. I will have a core of 24 models and so anything further can be built as and when required. In fact I see this as being a good way to maintain an ongoing interest in the project as it means that ‘freshening it up with something new’ will be easily achievable and fun to do.

That is the plan anyways!