Limbering Up for the Final Phase.... 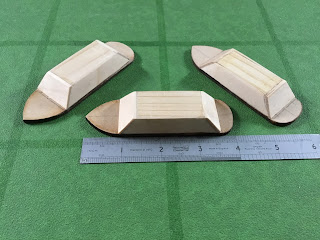 The hulls for the next three models prior to completion. Gun ports, funnels (funnel in the case of the C.S.S. Missouri, pilot houses and the paddle boxes to be added - not forgetting the all important flagstaff and the paint!

Those very nice people at Warbases - Diane and Martin - contacted me to say that my order is in the production queue for this week - HUZZAH!!

In the meantime I have set to work on what I can do in advance of the extra parts arriving to complete the models. I had planned to have a ‘masts and spars’ building frenzy for the Turkish ironclads but due to getting some games in and tidying up the rules I did nit get around to it. What I was able to do was to build the casemates for the two city class gunboats and the C.S.S. Missouri.

As usual these are very much built in the ‘purely representational’ school of modelling rather than being of museum quality. I used my Dremel on some of the pieces - I am still learning to use it so the scars on the casemate roofs bear silent testimony to my deplorable beginners technique - but fortunately the marks left over will be covered when the the models are fitted out and painted.

The models will be rather more ‘racy’ looking than the originals, mainly because of the shape of the bow not being quite so blunt. The casemate angles are also slightly awry but hey ho - they are purely representational after all. No matter, they will serve as intended!

I have a further four river paddle steamers to build which will leave me three spaces to fill to make up the twenty four models for this phase of the project. I rather fancy tackling a sloop for the Union as well a Benton. For the Confederates I am undecided but I am sure I will think of something!

Once this core of twenty four models is completed my plan is that should anything else for the ACW catch my eye I will be able to add it in as required.

I am rather looking forward to this as the navies will feature both the largest and smallest types of warship - in the case of the former Russian spar torpedo boats and the latter the Turkish ironclad Messudiye. I will need to give the Russians some heavier metal to even things out a little but fr me the real attraction will be building and using some of the Turkish ships in their original configuration rather than as the rebuilt versions still in service in the Balkan and Great War! As usual these will follow my ‘based upon’ method and I have to say that I am quite excited at the prospect fo building some of them!

This is all coming along rather nicely and I'm certainly looking forward to seeing the Russian and Turkish ships:)

The models that are left for the ACW will more or less build themselves so once the bits arrive from Warbases I can really crack on with them and also the RTW. For the latter I have two ships partially built, the hulls set aside for another 4 and also the bits and pieces I need for the spar torpedo boats. I shall build the two circular Russian ironclads and three or four AMCs for them as well and will probably add a couple of other ironclads.

The Turks will be getting five or six ironclads including the Messudiye.

I am rather looking forward to this!

Now that Warbases are working on the bits I need I am stoking up the enthusiasm to a frenzy! The remaining models will be blitzed through simply because everything is pre cut so it will like the wargames equivalent of Ikea flat pack self assembly....

That is the theory!

A fascinating series of articles, David. Looking forward to more!
Meanwhile, my own navies are expanding at a far slower rate. The Turcowaz (Turk) and Hellenic (Greek) destroyer flotillas have been built up to 4 (all of the same class respectively). The latter will be getting at least one more 'Hydra' class ironclad, and I'm toying with giving both fleets one extra capital ship.
Cheers,
Ion

I hope your guidance notes on assembly are rather clearer than Ikea's and that you don't have any mysterious bits left over at the end!!

Progress on my ACW ships would have been quicker if I had planned at the outset what material I would need for the number of models I was building! In my defence once I had started building te project rapidly escalated from 12 ships to 48 across two wars so perhaps the problem was understandable!

My Warbases order will be arriving in a few days so I ac then really blitz both projects.

You have a sound core to your naval fleets so adding to them as and when needed does not cause too many dramas - the ACW collection will continue to grow as and when the mood takes me but the main bulk will be to hand.

I have something rather special planned for the Russian Black Sea fleet and your commissioning of another Hydra reminded me of the same!

They would be clear if I wrote them down but luckily there are no pieces left over other than offcuts!