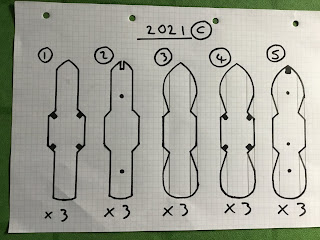 The three drawings to the right (3, 4 and 5) are the key three layers of the hull of the Mesudiye - there will be two plain templates under these making five layers in all. The lighter lines on drawing 3 give a good top down view. The two on the left are for the Feth - i - Bulend and her sister - these will be built up in the same way but with only a single plain template making four layers. I have the necessary templates for this class except for the two illustrated. They are smaller ships so by reducing the height if helps to differentiate them as I am not being too pedantic about scaling. 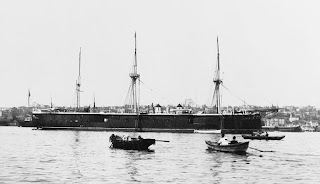 Mesudiye as originally built - her sister ship was taken over by the Royal Navy as H.M.S. Superb 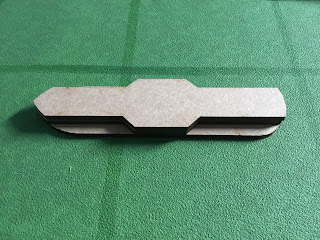 The above shows to good effect the layering technique I am using. It is a time honoured, tried and tested method for building up a hull shape! 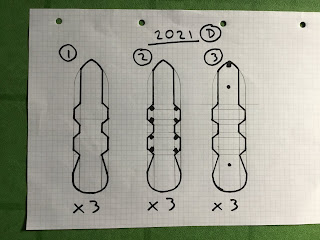 The plans for the Muin - i - Zaffir - note the double sponsons. Again these will be built up in three layers with a single complete piece as the base layer.

A plan of the sister ship of the Muin - i - Zaffir. You can see how my model will be using a different overall hull form as it is fuller at the bow and stern

In the immortal words of C3 PO “Thank the maker!’ Or in this case thanks to Martin and Diane at Warbases who are now back in the custom order business. I cannot tell you how pleased I am about this as by the addition of some selective custom cut pieces I should be able to more or less finish the building for the ACW and Russo Turkish War projects.

The pictures are above are the rather crude plans I have drawn up for the hull section for three of the Turkish ironclads I shall be building. It is rather unusual for me in that I have owned and painted all three types but in their rebuilt Balkan and WW1 guises but never in their original form. As ever these will not be to scale in that they are very much in the ‘based upon’ mould rather than the historically accurate.

Producing the hulls for these models will be very straightforward once I have the pieces from Warbases. The most time consuming part will be making the masts but even that is quite straightforward albeit fiddly.

First up though will be the remaining ACW models.

Martin and Diane are the ideal service orientated business people that this hobby should be and is proud of.

Warbases have done several little bespoke projects for me and are just a fab pair.

They are absolute stars and lifesavers as far as I am concerned! I will certainly be pushing a lot of work their way this year.

Much of my current project would have been a lot more difficult were it not for them.

I would wholeheartedly recommend them to anyone that needs anything MDF gaming related!

You really have developed a superb concept ... and I wish that your ‘parts’ could be made available as part of Warbases product range.

I have a few ideas for ship style bits and pieces and will be discussing the feasibility with Warbases. I reckon it would be easy enough to design a modest range that could be used on a ‘mix and match’ basis.

As mentioned the masts and spars will be what take the time and so I shall be starting them in advance of the hulls.

I am really enjoying making these!

The Turks certainly had some interesting ships in 1877 - the only problem was that they were still using some of them in 1914!

In the meantime though it is on with the ACW.

All the best and remember....

The force will be with you, always....

Splendid stuff David...
I agree with you about Martin... he is indeed a splendid fellow.

Magnificent. You know, until about four months ago I never would have believed that naval developments and architecture of the second half of the 19th century could be so interesting and such fun. One learns something every day - and some days even more.
Cheers,
Ion

Many thanks old chap! Martin and the indefatigable Diane are absolute legends as far as I am concerned! Anybody that can translate my scrawls and turn them into something useable will always get my vote!

For sure it has proven to be a rich seam to tap into and there is happily a lot more to come!

The plans look good David and a neat and easy idea to tackle more complex shapes. This whole project is coming along nicely, wether ACW or Russo-Turkish War:)

Once these are cut out building up the hull is really simple. Adding the deck detailing - in my case this is limited to hatch covers and similar) is also easy enough. The fiddliest part are the masts but I have got a good technique worked out for them and as long as you are careful it is straightforward enough.

Once the pieces from Warbases arrive I can really crack on with the main bulk of what is left to be built in fairly short order (fingers crossed!).