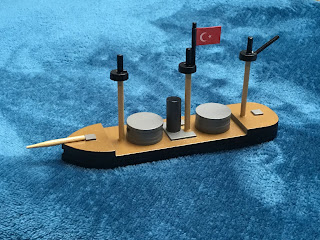 The original model (of which there are two). Nothing wrong with it and yet.... 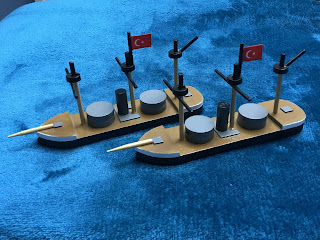 ....by adding to the sailing rig and applying some white trim to the hull it looks a whole lot more business like.

In advance of the resumption of ship building once my order from Warbases arrives I spent some time thinking about the models I want to build for the Russo Turkish half of the project. Whilst I have settled on the Turkish order of battle there was something nagging away at me in respect of the first two models I have built - the two river monitors of the Luft - u Celil class.

I built these two models with a reduced sailing rig but after further research decided that they need a little more in the way of spars. The option I have chosen reflects something of a compromise but given that the Turkish navy of the period seemed to be several steps behind the curve in respect of how ships were handled and maintained I certainly think it does not look out of place. I also took the opportunity to add a little detailing in respect of painting and so they now grace some rather fetching white trim - again this has been seen on a number of contemporary prints and pictures etc. 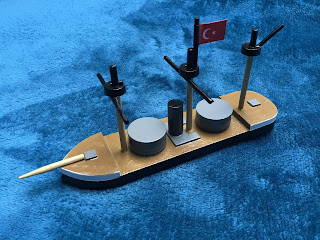 Taking it all into consideration it has certainly perked the two models up rather nicely and I think they look far better in their current configuration. I will certainly incorporate the white trim on the next batch of models I build for this project.

The spar and trim does make a big difference to the look of the ships David, which is of course a good thing:)

I am looking forward to doing the same on some of the bigger Turkish ships when they are built - the white trim will really make them ‘pop’.

It only took half an hour which was time well spent for sure.

That works really well David...
It’s amazing what a couple of pieces of dowel and a bit of paint can achieve...

I was really surprised at how it made the whole thing ‘pop’ but am glad I decided to do it. I am looking forward to tackling the other Turkish ships now that Warbases are back in the custom cutting groove.

First priority though is the ACW.