A Sailor of the King 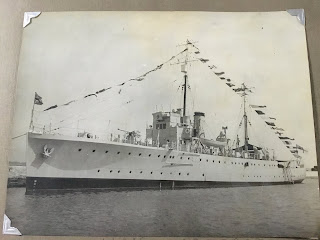 H.M.S. Scarborough in her tropical scheme of white with a buff funnel 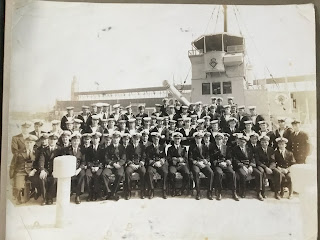 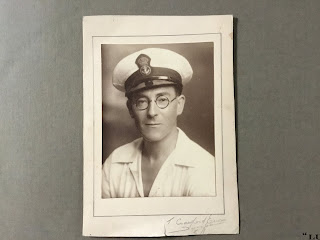 My late grandfather on my father’s side joined the Royal Navy in 1919. He eventually left the service in 1945 - he was due to leave in 1939 but for obvious reasons this was deferred  - with the rank of Petty Officer. He certainly appears to have gotten around and served all over the world - from home to the Far East although as yet I cannot see if the Mediterranean featured. I have most of his service records but trying to decipher some of the penned commanders, dates and titles etc is not easy! He seemed to have alternated between shore based duly and then being assigned to various ships has required. In no particular order he served at various times during his career on HMS Quillian - a Q class destroyer, HMS Manxman - the fast minelayer, HMS Marshall Soult - Marshall Ney class monitor, HMS Cyclops - a fleet storage ship, HMS Leamington - ex USS Twiggs a four stacker and HMS Scarborough - a Hastings class sloop. The shore stations he was based at, again at various points in his career, included HMS Pembroke, HMS Tamar II and HMS Wildfire.

His period of service on HMS Leamington coincided with the fateful decision given to the convoy PQ17 to scatter in July 1942. At the end of July 1942 he was moved off HMS Leamington and his commanding officer described his service as “Very satisfactory”.

His entire record records a succession of ‘satisfactory’ or ‘very satisfactory’ and although I do not remember him (he died when I was two or three) by all accounts he was a dapper, well dressed and fastidious man.

The main reason for writing this post is because aside from having his service records I also have an album compiled of photographs taken when he served aboard HMS Scarborough on her cruise of 1934. There is around a hundred pictures or so therein and below is a selection of them showing the Royal Navy between the wars. 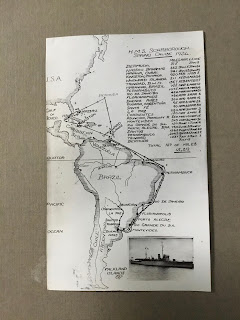 The route HMS Scarborough took during her spring cruise 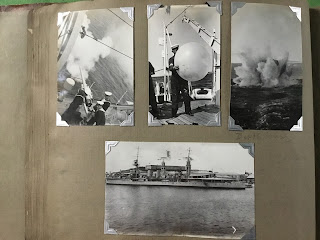 Depth charge and gunnery practise - not sure what the chap holiday going the large ball thing is doing! Note the cruiser HMS York 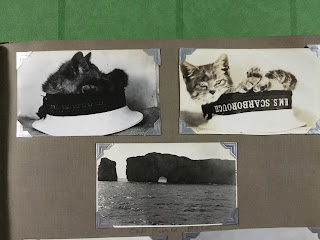 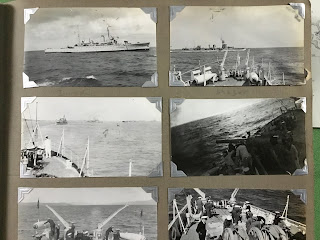 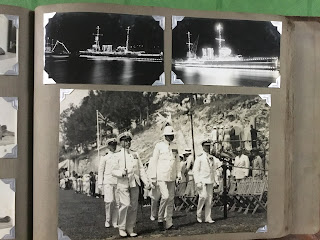 HMS York dressed for a reception and a naval delegation 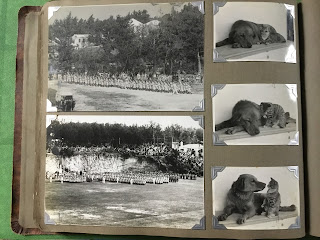 Full parade and the ship’s cat with a friend 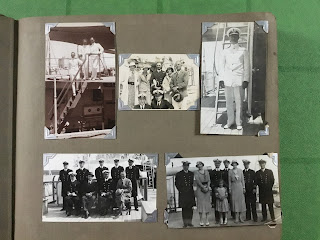 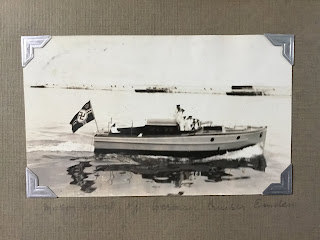 There are a lot more pictures of various aspects of the cruise - lots of ports and approaches to them, shots of the landscape from the sea and of various other ships - either in port or at sea. There are a number of pictures of the ‘crossing the line’ ceremony as well as various concert party style antics. I must take the time out to look into these in more detail as the collection represents a fascinating glimpse into the life of a sailor serving on a Royal Navy warship during peacetime.

I do not remember my grandfather but having these items of memorabilia in my care as his oldest living male descendant serves to give me an insight, however slight, into one aspect of his life.

A lovely post, and a fascinating insight both I to naval life and your family history

Thank you old chap! Many years ago we had my grandfather’s service medals but sadly these are no longer around. I know that I could organise copies and indeed, I contacted the naval records department of the admiralty but it will not be simple to organise as due to DP I have to prove my connection to my grandfather. It outdoor not be impossible but it would take a while methinks.

There are plenty of other pictures and so i will spend some time drilling down into them and his service records.

That is indeed fascination. You're so lucky to have those photographs, which really bring history and your grandfather's experiences to life.

I must get on with tracing my late father's war service. I've been putting it off for far too long.

The whole collection is a real time capsule and being as it is family has an additional attraction.

Fascinating stuff! AFAIK, none of my family were in the War, other than the Home Guard, due to being in reserved occupations (farmers and coal miners).

Interesting collection. You’re lucky to have these memorabilia Dave.

My father’s brother in law - my dearly missed Uncle Jim - flew Wellington bombers in the early part of the war. He was very much a boyhood idol of mine being of a certain vintage as I am!

On my mother’s side all were reserved occupations as far as I know.

It is a fascinating collection of pictures and having the service records as well is very interesting. He certainly got around during his time in the navy although I cannot see any reference to the Mediterranean.

What a wonderful collection ... and thank you for sharing the photographs with us.

I wish that my maternal grandfather had taken more photos, as he visited many places during his service as a Ship’s Sergeant Major. As a result, he was awarded the Atlantic Star, the Italy Star, and the Burma Star. He was also given the Pacific Star .... which should have been just a bar on his Burma Star as recipients of the former were not supposed to be awarded the latter as well.

Great pics! Thanks for sharing these.

No problem old chap! There are quite a few others which I will sort and post in due course.

I would like to rebuild his medal collection so will need to find out what he was officially entitled to. I recall seeing the Atlantic Star for definite - he had several stars - and there were a couple of round silver types.

There are a lot of other pictures in the collection which I will sort out - including some other warships as yet to be identified- so more will appear from time to time.

I am fortunate to have this album but these are all the pictures I have of his time in the Royal Navy.

Grea5 collection of pictures David! I suspect that the large ball is in fact a buoy used to mark a morning etc.

I think you may be right about the ball! There are many other pictures in the album and the selection above is but a fraction. I will post there’s from time to time as they are properly sorted.

Thanks for this, your GF had a very distinguished career and was lucky to survive the war - RN casualties weren't as heavy as say Bomber Command, but a lot of RN personnel never made it home. What was his trade, do you know?

He was a steward and finished his career as a Petty Officer/senior steward. He was due to leave the navy in 1939 - he had joined for 20 years - but was kept on due to the demands of wartime.

There are a lot of other pictures I will go through and feature on the blog from this cruise but other than the album and his service records I have nothing else of his which is shame.

Hi David , interesting stuff, and by chance my grandfather's brother served on the 'Marshal Soult' around 1917-1918. Small world..

Indeed it is a small world! I would certainly like to drill down into my grandfather’s service in more detail but that is perhaps a project for another day,