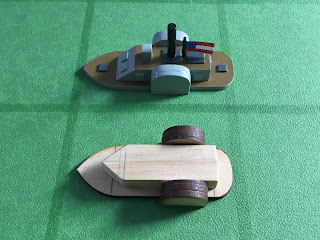 The top model used a 3mm thick MDF off cut for the outer layer of the paddle box backed by balsa wood sanded to the same shape. The model below shows the new method with carefully cut custom MDF pieces from Warbases.

Part of my Warbases order consisted of some laser cut pieces to be used to make the large paddle boxes seen on some side wheelers operating along the rivers during the ACW. I came up with idea - which is rather nifty in my opinion - so that I produce numerous copies of the same design. It has worked out very nicely although I managed to mess up the order and only obtained sufficient to build three ships whereas I wanted to build six! 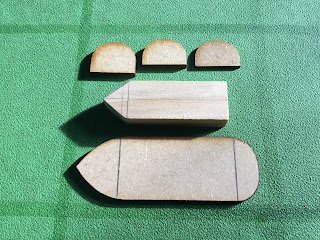 Note the three parts at the top of the picture that form a single paddle box. For this particular model the superstructure is fashioned from a single Jenga style block sawn into shape and with a 3 1/2” by 1 1/4” hull shape 3mm thick

My original ACW models used an outer layer fashioned from the top of a craft stick backed up with balsa woos that was sanded to follow the shape of the harder wood. It worked well enough and so I tried similar for the larger sized models I am now building but it seemed to be a lot more work so clearly a speedier solution was needed.

I opted to use MDF simply because I had some off cuts from the hulls I had shortened that were coincidentally the correct shape and size. It was an obvious step from this to having the requisite pieces laser cut, thereby ensuring consistency of shape and size. 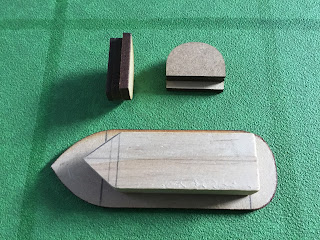 The above illustrates the paddle concept in action - all that is needed now is for them to be glued into place. For convenience I may well paint these before the final assembly so as to avoid any awkward interior corners!

Warbases only work with 2mm and 3mm MDF and the gap between the superstructure and the paddle box is 5mm so for each paddle box I needed three pieces - a larger outer piece of 3mm and two smaller inner pieces of 2mm and 3mm. These smaller pieces are also 3mm shorter than the outer piece to allow for the hull which is 3mm thick. The pictures of this in practice are probably rather clearer than my written explanation! 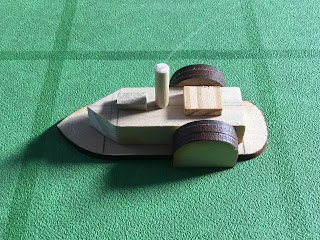 A mock up of a small river paddle steamer built using the paddle box method described. This is probably not the final configuration of this particular models as there are a few other bits and pieces that need to be added.

Due to having rather messed up my Warbases order - my own fault entirely - I will now only be able to build three paddle steamers rather than the six I planned although having said that I may look at stern wheelers as an alternative....

I’ve just had visions of something similar steaming up the Nile being shot at by Mahdists. Hope the vision goes away quickly or I’ll be doing a new ‘project’!
Thanks for the inspiration. I think 🤔

Comin along very nicely, these will look great on the rivers inshore from Immobile Bay :)

Funnily enough when I get back to Madasahatta there will be a number of Colinial style gunboats being built and I would be looking at Nile, the Tigris/Euphrates and of course the great rivers of China for inspiration.....

Re the inspiration - my pleasure old chap!

I planned to build 6, am able to only build 4 but will end up making 8 - as I recall there was a famous quote that I have mangled in there somewhere!

When I get to running the campaign properly they will see much service menthinks!

These are lovely little models, David.

The mind boggles as to what sort of instructions you need to send to Warbases.

Your lovely paddle steamers put me in mind of their plastic bathtub steam punk cousins (which I think might want to be airships when they grow up) https://poundstoreplasticwarriors.wordpress.com/2019/05/06/seaside-pound-store-plastic-clockwork-airships-and-paddle-steamers/

Those look very effective and perfectly fir in with the aesthetic oyu have been using with your other ships. Can't wait to see the finished article:)

Thank you old chap! My instructions to Warbases are a triumph of precision and clarity (well to me anyway!) but any problems are down to me - and yes, I have messed plenty of things up! They are very forgiving of my ham fisted draughtsmanship attempts which is just as well really.

The biggest single advantage for me is that I get a uniformity of cut and dimension so once the basic shape has been settled on the rest is just minor detailing.

Hello there Mark, Man of TIN,

I see what you mean - and funnily enough I have a few cunning plans for something steam punk based....

Thanks old chap! The collection will have a common theme of being highly stylised and short on fine detail. And scale....

They are purely representational and I really enjoy building them!