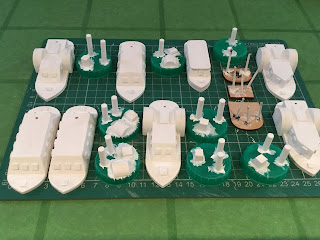 All undercoated and ready to paint - five for the Union and (now) three for the Confederates.

A day of work based priorities so aside from the two coats of undercoat on the models (including the flagstaffs) no real advances on the painting front although I did sneak another ship into the line up. The Confederates will be gaining the C.S.S. Little Rebel (commissioned in my Confederate set up as the C.S.S. Small Secessionist) which was a cotton clad ram that formed part of the River Defence Fleet. The eight models you see above will take the project total to twenty four models once they are painted. I then have a further twelve to build for the ACW but that will then be it and I can then get on to the Russo Turkish War.

It is moving along quite nicely.

Moving along very nicely indeed, I really like what you have done with these.

Thank you old chap. I have to say that once I took the conscious decision to move away from museum levels of fine detail and scale it made the whole thing a lot easier to get off the ground! Impressionistic, stylised, based upon, old school or purely representational - these all fit the bill when describing them - they certainly look the part!