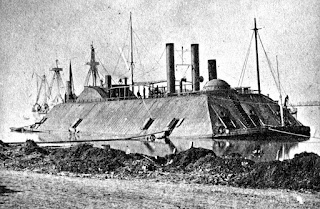 The U.S.S. Essex - with a casemate that seemed to go on for miles....She was longer than the city class by around 25 or so feet but seemed larger than that, in part I suspect because of her long but relatively lightly armoured casemate. 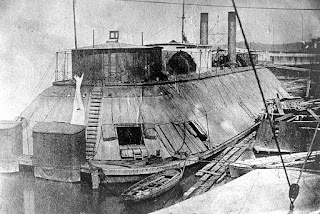 A view from the stern. Note the rounding of the casemate. The two box like structures at water level are in fact the heads!

The river ironclad section of my Union fleet will not repeat the heady days of my previous collection - I had built around 12 of them of various sorts - and instead will be a rather more modest four vessels. I have already built a pair of city class gunboats and will adding a U.S.S. Benton and the subject of this post, the U.S.S. Essex.

The challenge with building this model is the curved end of the casemate. All of my models that feature casemates are essentially square or rectangular - I have not tried any of the Confederate octagonal types - as these are easier to build. I wanted as Essex to a curved section had to be fashioned. I had built the Essex previously so the technique I used was the same as previously only on a larger scale.

Balsa wood is your friend in this case and so I glued two section together - fortunately this was the same height as the casemate - and marked the top and the bottom with semi circles of the desired size and then got to work with an emery board. The results you can see for yourself came out rather well. 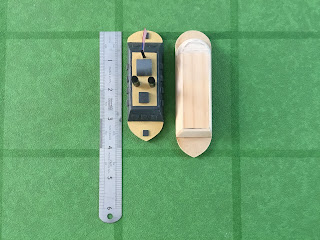 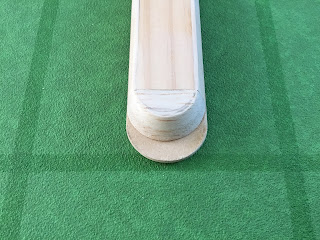 A closer view of the stern and the rear of the casemate. 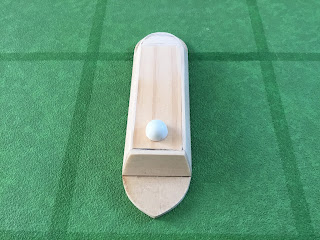 A view from the bow. The domed cupola was also going to be a challenge but I made use of a plastic marker from the game Mastermind with the peg cut off!
All being well she should be joining the rest of the collection over the weekend but the Benton will have to wait until I can get the template from Warbases, along with the parts for the three Union timberclads.
Previously I had said that I would be adding a further dozen models to the collection but this is now looking like it will be slightly more than that. I don’t mind though as I would rather get the collection as complete as possible whilst the mood is on me. I keep expecting to hit a wall but so far, fingers crossed, I have been enjoying this too much to be overwhelmed!

A good start David and she is a bit of a beast of a ship!

She certainly looks the part but was lightly armoured and undergunned. She saw a lot of action though!

The model is now built, sealed and undercoated and ready to paint which I shall be doing over the weekend. Best news of all though - my Warbases order has shipped so I can crack on with the next three paddle steamers.