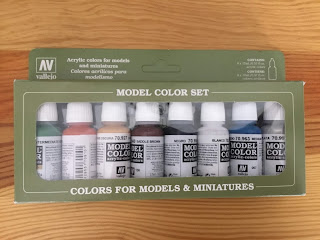 I have been a long time Humbrol paint man - since way in the early 1970s - and indeed, I still have a fondness for them as well as a sizeable collection of tins, many of them dating back until then! I have dabbled in acrylics for occasional projects with varying degrees of success - primarily for things like Battlefleet Gothic spaceships or the odd Battletech mech. I have not used them at all on figures as the only time I tried it did not end well.

I have some 28mm figure painting plans for this year - very much at the skirmish level rather than full scale armies - so I have taken the plunge and invested in a starter set of Vallejo paints. Yes I know that the palette I have is very limited but for me this is very much a statement of intent so I will add to the selection as required. I should mention that I have been using Vallejo black, white and buff for some time and have been hugely impressed with them in terms of coverage and flow so it was an easy decision to make as to which paints to get.

I will still use the Humbrols - I have far too many to replace in one hit - and reckon that I will still be buying them but the quantum shift is now in place and so acrylics will become a larger part of my painting armoury.

I feel as though I have finally caught up with the 21st century so better late than never! 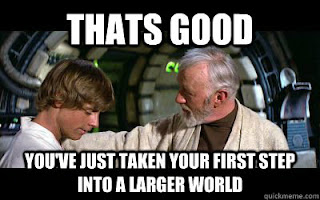 Cheers old chap! I figured it was about time....

I have many fond memories of using Humbrol paints, but I don't miss the strong smell that permeated my bedroom as a kid! Acrylics not as durable but much easier to use, except when it's rather hot as they dry almost the minute they hit the paint palette.

Gave up on turps and enamels about 30 years ago , tried going back for Old School figures but don't like the smell of thinners now .

Come on in - the water's lovely! ( and you can clean your brushes with it ) Chuck away that white spirit..

Hi David -
My wife bought me that Vallejo 'starter pack' some 5 years ago. It still gets a lot of use - just about the handiest 'general' pack one could have. The red-orange, by the way, I regard as the ideal 'aurora' for French Napoleonic facing colours. I have also found that the black/silver mix works just as well as Humbrol's silver and gloss black for burnished metal. Go easy on the black unless you're doing Imperialist cuirassiers of the 30YW.

My one caveat: you need to 'flick' the bottle really hard to mix the paint and not get a watery glop.
Cheers,
Ion

There is a bit of a learning curve, especially if you use a wet palette which helps the paints to not dry while using them, but also thins them too.

I still use my enamels though. Metallics, with black and white for priming.

Well done! I think you will be delighted with how all this makes painting an even more pleasant event for you .

Congratulations David, at last :) Seriously though I'm a big fan of the vallejo paints and a quick count up tells me I have close to 150 bottles including spares/duplicates which is probably overkill I know. Over the years I have got it down to a limited number of shades, selected mostly for coverage over matt black basecoat in one coat. Shades such as Flat Red, Flat Brown and Off white are invaluable to me. As Ashley mentioned above I would very much recommend acquainting yourself with the wonders of the Wet Palette as it can save you a ton of paint and improve the flow of the thick colours, I have been using various home made versions for about 10 years now, advantages are that I can squeeze a blob of paint on in the morning and it's still usable the same evening :) Sorry for rattling on, but as you know I spend several hours each and every day painting figures so I have become a bit of a fan of Vallejo. And then of course there are the washes.......
Let us know how you get on with them?
Lee.

The plan is to start small with the figure painting hence my choice of skirmish style projects. The enamels will still be used simply because I have so many of them. You are right about the smell though - I won’t miss that!

The last batch of figures I painted were using enamels with acrylic metals (it was a 15mm Numidian DBA army) and it was not a pleasant experience as the enamels were being difficult for some reason. I have used enamels primarily for the ACW ships although the buff decks are Vallejo.

The smell of enamels has never really bothered me although the rest of the house would say otherwise!

Hi there David in Suffolk,

Sadly I will need to keep the thinners as I will be using enamels for stuff - at least until I have used them up!

Good shout re the ‘flick’ although after years of vigorously shaking enamel tinlets and then stirring the contents for hours on end I tend to do that with paints automatically!

It is certainly a good basic palette to work with and I am sure it will serve me well.

Wet palette? One step at a time methinks! I have been using cheap acrylics for undercoating for some time now - mostly my daughter’s art supply from her Uni days!

The only agitator I need is painting in the first place! Seriously though, that is a good idea especially as I will only be occasionally using them. Having said that I had a half used Vallejo Buff that was perfect even after having not been used for some four years.

I am starting in a small way with skirmish level stuff as i want it to be an enjoyable experience rather than a chore.

Glad the book arrived OK so enjoy the read!

I must admit to being quite looking forward to trying out a few painting ideas - not on an industrial scale but certainly skirmish level. My first batch of figures will probably be something from the pile of Star Saga 28mm types. I am a dyed in the wool white undercoat man although am open to trying a black version. As alternative suggestion that my old friend Chris Hardman made was to white undercoat and then thin black wash prior to painting. I would think this makes a good compromise.

I will be adding to my selection although it will be a while before it gets to the level you have!

I have not tried a wet palette as at the moment my usual method is to squeeze a couple of drops onto an old CD case with a milk carton cap with some water to dilute as needed.

As for washes I have some Nuln Oil but want to get some Agarax Earthshade at some point.

Don’t be surprised if I ask you for the occasional pointer!

I can recommend white basecoat with a black wash, and if you want to take it to the next level, then dyrbrush white emphasizing the upper surfaces for a quick and dirty zenithal highligh undercoat.

Check out my blog here: https://panther6actual.blogspot.com/2021/03/mechs-and-technicals.html

Many thanks for the link - I was sure I was ‘following’ you but you seem to have dropped off my list!

Thanks for the follow, tell all your friends. Perhaps you're following my writing blog, of course assuming you know I've written a trilogy of SF books: think Stargate SG1 meets Starship Troopers.

Think I'd agree with both of Ashley's suggestions (white with a black wash/dry coat), but without a doubt having come to it this year, a wet palette is a game changer.. this is the vid that gave me the low down...

Hello there Steve the Wargamer,

Many thanks for the link old chap - much appreciated! For me a white undercoat with a black wash makes a lot of sense as I am more used t working from a light base upwards. The wash will sink in the shadows and then blocking in the rest should be easy enough - even for me!

I will take a look at the wet palette concept in more detail.

The only thing I need to decide then is what to paint first!

I used Humbrol enamels back in the 80s, but plunged into acrylics when I returned to wargaming in 2011. I started off with the Revell Aquacolour, but soon switched to Vallejo.

As others have said, there is a bit of a learning curve with acrylics to get the consistency right, but once you have the knack it's easy from there on.

My experiments so far have been limited to ship decks although around 20 years ago I painted up two Battlefleet Gothic fleets using the colour schemes from the rule book and solely GW acrylics and inks. They actually came out pretty well as I recall and when I sold them to a fellow gamer at the club - a seriously good figure painter I might add - he said that he only needed to touch up a few bits and pieces as they were virtually good to go. I remember being pretty chuffed at the time!

I want to start small so skirmish level stuff will be ideal to experiment with. I have a pile of Mantic Star Saga stuff to work through but I have a hankering for something historical - not sure what though!

The ACW ships will continue to be primarily Humbrol enamel painted as I have rather a lot of tins left....

Happy to oblige - I will even post a view when I have read them!