The Balkans in 1900 - The Idea begins to take Shape 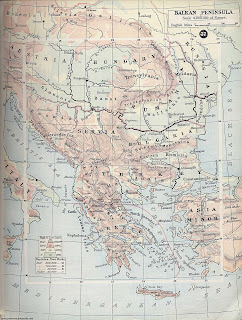 Above is a rather handy map of the Balkans in 1900 which will be the era of my forthcoming project. The essential difference between 1900 and the war in 1912 is that it was pretty much a free for all in respect of who could potentially be fighting who - all the while being mindful of the Great Powers stepping in. In 1912 initially it was everybody versus the Turks until after they were beaten when Bulgaria became the villain of choice. The politics of the era were truly Byzantine in their complexity but there was one consistent fact that influenced most national agendas - that being the crumbling of the Ottoman Empire and the jockeying for pole position to pick up the inevitable pieces. Most of the European nations of the region had their own ideas of exactly what that wanted in terms of territory which led to much in the way of petty squabbling, sabre rattling and political brinkmanship.

From a gaming perspective the period has not only the attraction of some truly exotic and colourful troop types but also everybody fought everybody at some point so there should be no problem organising a battle! The equipment in use would vary from the most modern (in very small quantities) to some quite antiquated kit from as far back as the middle years of the 19th century. At the present time I have both the Turks and the Bulgarians but will also be acquiring the Greeks, Serbians and Montenegrens in due course. The armies are sized at what can best be described as double sized DBA - roughly 24 to 30 bases with regular infantry based in 3s, cavalry and light troops in 2s and guns etc with 3 gunners for field artillery and 4 for heavy. The bases will have 40mm frontages and will be for use on my Hexon terrain.

The naval side will of course feature and the models will be scratch built to fit in with my Hexon 'sea' tiles so the biggest ship will be around 3 and a half inches long and of course, this will mean Victorian liveried pre-dreadnoughts.

I have a useful map of the region for the naval side from the Great War at Sea Mediterranean boardgame. The rules for this game also feature a nice strategic movement system that may be called upon should the need arise. The Balkan fleets will be larger than they were historically but only to give an extra dimension to the action - my current thinking is to have 15 to 20 year old cast offs from the Great Powers polished up and sold at a knock down price to whatever power wanted them ("One careful owner who only used it for reviews, honest guv'nor!").

As mentioned previously, I am going away for a week at the end the month to Corfu and so I intend to plan the project in much greater detail whilst I am soaking my feet in Ouzo....;-)
Posted by David Crook at 16:50

If I may make a couple of suggestions on the naval front, why not mix up the used ironclads with a bit of modern light stuff. Elswick cruisers (cheap, fast and effective) seemed to be available almost off the rack (or on the stocks from a bankrupt Latin American Navy). Also destroyers, TBs and even Holland submarines.

This project is beginning to look so tasty I could eat it!

Seriously, I think you have some excellent ideas, and if you ever want someone to act as a player, I would love to be considered!

That was exactly how I was thinking so I guess great minds etc! The naval arms trade of the period is a ripe subject for a book all of its own as sometimes commercial considerations were at odds with government policy which makes for some interesting possibilities.

Needless to say this is a part of the overall project that I am really looking forward to!

Many thanks Bob - considering that the rules I shall be using for the land side would have originated from your hand I would be highly delighted to take you up on your offer!

The more I have looked at this the greater the potential I am seeing and like most of these ideas I wish I had thought of it sooner - oh well, better late than never!