Ironing out a Greece or two or Turking the Initiative.... 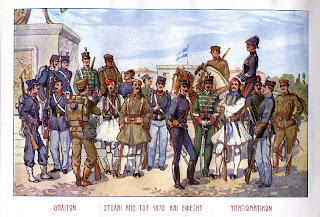 The ACW naval collection is now filled, sealed and ready for undercoating which I shall be tackling at the weekend en masse. I am unable to do this any sooner because I need to do this outside and I also have to get some spray primer. In the meantime though, I shall get the name labels ready and printed and sort out the flags for the bases. To fill in the time then, I have been giving the Balkan project some further thought and have been checking out uniform sources.

Turkey and Greece are absolutely fine in respect of the figures available and all that will be needed will a paint job. The Greek uniform changed over to Khaki after the period I am looking at and although the new tunic has patch pockets on it as opposed to the earlier plain, French style version the paint will take care of this. The officers will be (under the Irregular suggestion) Japanese Colonial/1905 vintage figures. Again, the distinctive Evzones will merely need a paint job for the earlier uniform. I am still digging around for information on the Bulgarian army of the era - there seems to be plenty about but sadly my Bulgarian is not up to much!

I have settled on a 'toy soldier' style of paint job and am seriously considering basing the figures individually with some trays for bulk movement. I am some way from this being a pressing decision though!

The naval side will again be fairly simple to organise. I plan to have the Greek and Turkish navy built as they were for 1900 but will add to them those ships that they gained between 1900 and 1912 but earlier versions of them so, for example, instead of the Greeks acquiring the armoured cruiser Georges Averoff they will acquire something older. Similarly, the two ex-German battleships the Turks gained will be earlier ones. The twist will be that the ships the two nations gained historically up to 1914 after the Balkan Wars will instead be state of the art 1900 ships. In effect, I am resetting the naval clock whilst maintaining a modicum of feasibility.

For practical reasons it will also save some tricky turrets having to be built!
Posted by David Crook at 20:44

You have to adapt sometimes to fulfil certain things in wargaming, we all do it.

You are so right! I guess that this project will more likely fall under the alternative history banner rather than imagi-nation as a result.

Either way though, it will be a lot of fun!