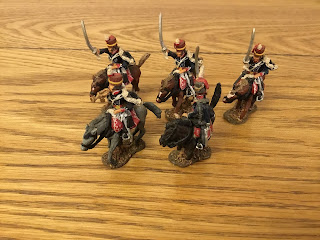 Hinchliffe British Hussars - these were in the Del Prado collection but by mistake and so will be heading back to where they cane from. Lovely looking figures though!

Yesterday saw work continuing on the Del Prado Collection and so I was able to completely clean up 16 British Hussars, 9 British gunners and 5 British mounted commanders - including the Duke himself. I was also able to make the appropriate repairs to a British horse artillery gunner, a British infantryman and 2 Prussian Dragoons. All of these have also had their bases properly filed flush and cleaned up as far as possible prior to painting, varnishing and basing. Currently soaking are the remaining British cavalry being the Scots Greys and the Lifeguards.

Whilst beavering away at all this lot my thoughts went to the possibility of paint conversions and unit representations. The Del Prado range does not replicate every single unit that took part in the battle as the focus is mainly on the key players. that is fine but it does mean that there are some holes in the order of battle. Many of these can be addressed by the time old method of paint converting. Old Painter Bob had already thought of this and so the French Guard cavalry now has a unit of Polish Lancers as well as the Red Dutch version. A Prussian general has been painted black for the Brunswickers and also some Hanoverians have been pressed into service as the KGL Light Infantry that garrisoned La Haye Sainte. He also tackled a unit of Prussian Hussars in a similar way so that I now have two different regiments.

I have no problem with this at all and indeed, given the limited range of figures available within the collection it would be foolish not to consider doing something similar - and so I have.

My plans at the moment concern the British. Back in the days of my Airfix army for the period I had two regiments of Highlanders - both the 92nd and the 42nd. Well, I have sufficient figures to replicate this (bearing in mind we are only talking of 6 figures in each unit) so they will be on my 'to do' list along with another unit, possibly two, of British Hussars. I also have some plans for the British Lifeguards. A quick splash of Blue and voila - you have the Horse Guards. I also what to use the figures as the basis for some heavy dragoons. I reckon that by trimming the helmet crest and painting the entire thing black to represent an oilskin cover would pass muster (it is what I did with some Airfix French Cuirassiers  when I converted them into British Heavy Dragoons way back in the early 1970s) but sadly I am stymied by the lack of figures at present.

This could potentially be the thin end of the wedge as the last thing I want to do is to undertake wholesale repaints - if I was going to do that then why would I have acquired a ready painted collection? I want to personalise a couple of units for the sake of variety but for the most part I shall be leaving well alone other than for the odd touch up here and there.

One decision that I have taken concerns the use of other ranges of figures with the Del Prado collection. Initially I planned to only do this if I really had to - specific figures for units not available - and my go to range of choice would be Tradition as they are of a similar build. However, I am going to relax this a little as I reckon certain other figures may also fit in quite well. These will be older style figures so no Foundry, Perry, Front Rank or similar but earlier Hinchliffe would certainly be a good shout.

The two armies that will need to make use of other manufacturers figures will be the Austrian and the Russian when I get to them. I have a selection of Russian cavalry and artillery from the Relive Austerlitz range but will flshe this out with some old Hinchliffe and Tradition - which is what i did way back in the early 1970s when I started on an 1812 period Russian army!

What goes around eh?
Posted by David Crook at 13:10

David - I'm following this series of posts with interest. One issue I've wondered about is what figures you can use to fill gaps or extend the collection, so this post is right on the thread for me - just out of nerdy interest, how did the Hinchliffe strays line up with the Del Prado chaps for size/build?

I am unsure of the vintage of these particular figures but they are on the large side compared to the Del Prado types. Early Hinchliffe would work well and you will see what I mean a couple of weeks (he says, somewhat mysteriously....).

Overall the closest fit seems to be Tradition 25mm. I will acquire some of these in due course to gap fill the existing collection and for the Austrians and remaining Russians.

The weirdest thing at the moment though is reacquainting myself with the 1815 campaign and reminding myself of just what I have forgotten about!

Ah the fond memories of the Airfix magazine and the conversions contained therein! These days I'm more than happy with paint conversions and/or counts as to represent new units etc. Frankly life is too short to worry about such details, which is heresy for some I'm sure.

I must confess that I have gone long past the stage of being hung up over points of detail. I like to think of my gaming as being 'based upon' rather than detailed simulation.

For the record I took a standard Airfix French Cuirassier and carved away the cuirass and changed the horse furniture slightly. A generous coat of PVA and painting followed.

They looked pretty good but had a terrible record in battle!