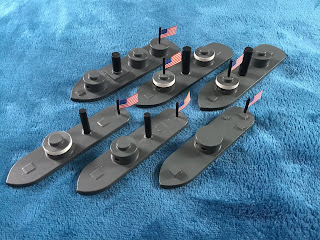 Union monitors. The two new additions are on the right of each row with the U.S.S. Monitor at the bottom.

An end of sorts. I have completed the Union monitors for the ACW naval project and these cover a nice range of the types that were completed. In truth the collection is rather top heavy with a triple and two double turreted types as opposed to three single turret versions. I am not overly concerned by this as the likelihood of of them being used at the same is remote but it is nice to have the choice. 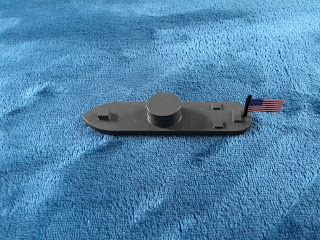 My version of the U.S.S. Monitor

I opted for the U.S.S. Monitor as she is such an iconic ship it would have been rude not to include her - along with the C.S.S. Virginia when I get to her. The C.S.S. Louisiana - note the two wheel houses. She had two paddle wheels and two screws to aid with manoeuvring. This was not an efficient method of propulsion as the lead wheel interfered with the following one and created eddies around the rudders making her difficult to manoeuvre.

For the Confederates I have converted the generic large sized casemate ironclad into the C.S.S. Louisiana, She was one of two large ironclads (the other being C.S.S. Mississippi) that, if completed with a decent power plant and the requisite artillery, could potentially have been rather effective. As it was and like the C.S.S. Georgia, she was used as a floating battery during her short career. Very imposing looking though. 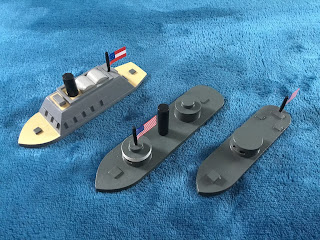 For good order sake the three models completed today are shown above. The next batch of models will be seven strong - three for the Union and four for the Confederates - which will see the last of the Rebel gunboats commissioned.

That is 42 models completed.

Thank you old chap! I am looking forward to the next batch - something a little different.

Cheers old fruit! It was surprising how much even a couple of weeks away from the modelling/painting desk seems to slow you down a little. It was good to tackle these as they were very straightforward and enabled me to get my eye in once again for the final push.

Going to give you an A* on this one

Why thank you kind sir! The rest of the collection is now in the production queue and the rules are in need of a little fine tuning but all is well.

Who knows? Perhaps an ACW ironclad game at COW next year might be in order....

Marvellous stuff David...
I honestly hadn’t realised that there were so many ships to be found in the American Civil War...

Thank you old chap! There are some truly odd looking ships in the ACW for sure!

42 models! I'd rate those as very considerable navies indeed!

By the time I have finished there will be 59 models. Originally I was looking at around a dozen or so.....