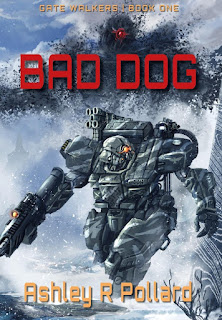 Available from Amazon and I am certainly looking forward to reading  this - gotta love some big stompy robot action!

Apologies in advance but this will be rather a long post so settle down with a cup of tea and a chocolate Hob Nob and enjoy!

It has often been noted on his blog and on others that most wargamers are a generous lot. We have all at some time or another either been the recipient or donor of items that only a wargamer would appreciate. This could be books, rules, games, figures, unbuilt models or indeed, pretty much anything we need for our hobby.

This week I have been on the receiving end of two such examples of wargamer’s largesse and so I would like to describe them for you.

Ashley Pollard, author, archer, bon vivant, with and raconteur is fond of science fiction games that involve fighting robots or anything AI related. This includes things like Battletech, OHMU (remember then?) Heavy Gear, OGRE or anything similar. After an exchange of emails  and to cut a long story short, she had a sort out of bits from her collection that were surplus to requirements that she very kindly passed on to yours truly. A box full of cybernetic mayhem arrived earlier this week that  have only just gotten around to sorting out properly. The two player starter set for Heavy Gear and.... 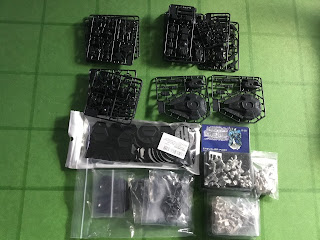 ....the box of goodies that Ashley sent me! Note the two hover tank sprues

For the most part the models are from Heavy Gear and I have to say that they are really nice. From the selection available I could readily field two forces for some ‘giant stompy robot’ action but I have a feeling this will be the thin end of the wedge. I would be keen to expand the selection I have and so am casting cover tours eyes at the two player starter set for Heavy Gear - as soon as funds permit.

There is a bag of personal weapons included that are designed for customising the models but I am thinking that some of these would also serve as weapons on 28mm Sci Fi figures - very handy with the imminent launch of Star Grave.

I mentioned that Ashley is an author and as I am a bit of fan of ‘gritty’ style Sci fi novels (think Aliens or Blade Runner) will certainly be taking a look at her Bad Dog series.

What can I say other than many, many thanks Ashley - this has given my Sci Fi mojo a major shot in the arm!

This morning saw the arrival of the second parcel I was expecting - this time courtesy of that renowned man about town, rake and ne’er do well (actually a jolly nice bloke with a great line in amusing escapades...) The Jolly Broom Man.

This was able that few in the telling involving as it does 18mm ECW Wofun and Medieval Cogs. There is a tale behind the latter but I will save that for another post but suffice it to say as the result of  his ‘I am never going to get around to using that’ type of clear out I am now the proud owner of a pristine copy of the base game of Black Seas: Master and Commander, together with some scenic bits and pieces - gotta love a lighthouse - and a rather nice looking resin casting of a Tudor Great Ship. Well it is ship, I think it is Tudor and it s certainly great so qualifies....

The funny thing with all this is that I now feel rather more confident about tackling an age of sail ship than I would have done prior to the great ACW build fest - despite the fact that there has been no rigging involved on those ships that have needed it! Perhaps some refurbishment may be called for in due course.

This was a most welcome addition to the collection as I have a hankering for something age of sail related  but was originally looking at building the models myself. That may still be an option but for now at least I can think about just painting and rigging some models as the building part will take care of itself.

Of the Jolly Broom Man I can say only this - many, many thanks old chap and suffice it to say the creative cogs are turning!

The two examples above of the generosity of wargamers helps to give one a warm and fuzzy feeling (for various personal reasons they gave me a huge boost this week) especially during these difficult times we find ourselves in although hopefully not for much longer. There is a lot to be said for passing on old and unwanted stuff to someone else that could be interested and so I continue to be proud to be a participant in a hobby where this incredible generosity still has a place. “Quod Severis Metes”

Just to show that it is not all rock and roll at Maison Crook SWMBO and I headed to our local IKEA at Lakeside to pick up six new chairs to go with the dining table. We only had to cue for some 35 minutes to get out and the new chairs went together easily enough with no missing pieces or bits left over.

It gives me a lot of pleasure to pay it forward. Have fun, and I look forward to seeing mecha wargaming on the blog in due course. Like real soon... ;-)

Once I can get to the models I could get something going pretty quickly but it is getting to them that is the problem at the moment!

It will be as soon as I can make it so!

Many thanks once again,

Glad you liked your parcel old fruit. The wargaming / blogging community is a pretty nice one to belong to. People have been very generous to me with their time, knowledge and encouragement over the past few years, so I’m only passing on their good vibes. Loving the stompy robots by the way.

You are absolutely right about the generosity of the denizens of the blogosphere - not just in material terms either but with time, hints and tips and encouragement along the way!

I am inordinately fond of big stompy robots.....

David, chill man. It has taken me from February 2020 until now to make and paint three mecha. I'm as slow as snail snot for getting projects done. But there again, it's a hobby not a job.

There is many a slip ‘twixt the cup and the lip so whilst getting something stompy robot related on the table sooner rather than later would be nice the reality is a little different!

Hopefully by the end of the year!