The Blocks of War 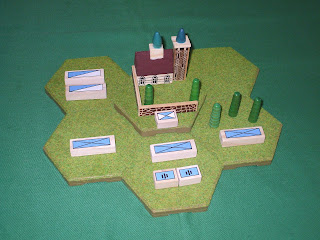 A brigade of Blue infantry, supported by artillery and cavalry defend a country church on a hill. The brigadier oversees his command from the wall of the churchyard. Terrain from the 'Town in a Bag' deployed on Hexon flocked tiles.
I have had a very productive weekend on the block front. I have been able to label one complete set of not-quite Jenga blocks - in red and blue. I should point out that this set is very much a test bed for reasons I will explain later but suffice it to say the blocks cover very basic horse and musket types - infantry, cavalry, artillery and command. I have plans for adding infantry and cavalry skirmisher blocks in due course once I have the core 'look' bedded down. The only thing I have to consider at this stage concerns the representation of artillery units - either the standard military 'dot' or a stylised cannon symbol a la Chandler's Campaigns of Napoleon. The stylised cannon will probably win it but it will mean I will have to produce something similar for anti tank guns, machine guns and mortars etc in order to be consistent. 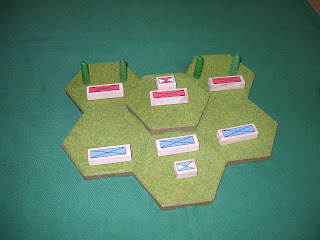 The 'Thin Red Line' awaits the attack of the advancing Blue infantry - shades of the Peninsular perhaps?
The pictures show some of the units deployed just to show how they look and to give an idea of what I am tying to achieve by using this approach rather than figures. As mentioned, this is really a first attempt - the gaming equivalent of a 'concept car'- but thus far I am very encouraged.

The Blocks of War in their raw state.
I managed to source a very cheap supply of blocks - from The Works in Basildon at £1.99 a set - and so hoovered up four sets. I was very pleased by these as the blocks are larger than those in the test version (as the comparison shot below shows) and so will fill the Hexon tiles with greater 'presence'. They will also be far easier to cut in half!

I have yet to consider which rules I will be using with this setup - the main front runner at this stage is Bob Cordery's Portable Wargame which I believe he is currently tweaking in response to player feedback and further thoughts. I will also be looking long and hard at 'Volley and Bayonet' by Messrs. Chadwick and Novak as they are pitched at exactly the army level type of action I want to represent and which I think the blocks are well suited to. 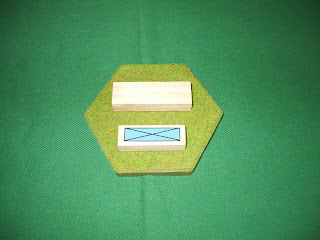 First draft and the second edition
Posted by David Crook at 22:47

I decry the senseless inflation of the second edition! It is nothing but a cynical marketing ploy to gouge more money out of naive wargamers. You have not heard the last of this Crook, TMP shall hear of this!

The term 'second edition' was perhaps a slight misnomer - I only had one set of the original blocks and so would have been unable to replicate the size of block going forward. Sadly the container of the said original blocks furnished no clue as to their origin and any attempt to acquire more of the same (i.e. the first edition) would have been frustrated.

I also 'decry the senseless inflation of the second edition! It is nothing but a cynical marketing ploy to gouge more money out of naive wargamers.' but sadly circumstances forced this course of action upon me besides, it was cheaper than buying the timber and cutting it to size.

Please accept my apology for any offence or righteous indignation this may have caused over the port or brandy in CK Towers.

I am rather pleased though that no mention of the heretical use of blocks of wood rather than figures was made - presumably the end result demonstrated a satisfactory alternative....;-).

TMP? Infamy, infamy, they've all got it infamy....

For £1.99 a box of 51 blocks they are cheaper than buying the wood itself!

Lots of uses for them including modelling as well or even, perish the thought, a game of Jenga itself!

Many thanks old chap! They are very much a work in progress but once the labels have been set the potential is, for me, truly enormous!