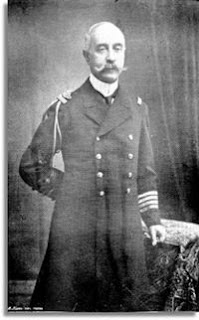 Admiral Pavlos Kountouriotis (here as Captain)
I have spent some today pondering the naval side of my Balkans project - this will follow on after the land element is in a game able condition i.e. I have two sides finished and ready to use! The main fleets will be the Greeks and the Turks and I am reckoning on there being around 50 models combined for the two. Add to this the representative Great Powers then the list easily heads up towards the 100 models mark. I should point out though that half of this will be torpedo boats of various types. The ships covered will vary from state-of-the-art (for 1900 anyway) pre dreadnoughts through old and new armoured and protected cruisers and central battery ironclads. In short, a real mixture of old and new.

I will spend some time during my forthcoming holiday deciding exactly what I shall be needing to make for the fleets - the historical stuff can readily be sourced but I will need to do some digging into what Eric Knowles used to refer to as 'never was-ers'. These are those ships that were either ordered and never built, built and taken over or merely existed as a set of plans. The situation in this respect is fairly well covered for the year leading up to WW1 but less so the further back you go.

I realise that this all seems a little in advance (I will not get to the models until at least the 4th quarter of the year) but once I have this aspect bolted down I will be able to concentrate fully on the armies as they must, in all honesty, come first. I like to think of ship modelling as being my prize for painting the land forces first!
Posted by David Crook at 21:13

100 ship, hmmm this is getting interesting .. hmmm

I realise it sounds a tall order but as mentioned - around half of the models will in fact be torpedo boat/destroyer types and they are pretty easy to make en masse. The difficulty will be turrets and shielded gun positions!

It is still in the planning stage but I am very much looking forward to tackling the ship models but will need to paint the figures first!

I look forward to seeing this project come together. What did you have in mind for the ships, use some of the old Minifigs WW1 vessels or scratch build everything ?

What scale did you have in mind ?

I have a large pile of the Minifigs ships that are crying out to be used for a project like this but sadly I have none of the pre dreadnoughts I have sufficent cruisers, loads of dreadnoughts and battlecruisers and plenty of Torpedo boats but only a single pre dreadnought. To be honest I would prefer to use thse but had resigned myself to having to build the models for a 1900 set up - not that that is any bad thing!

I may try to track down a supply of the pre dreadnoughts and see how we go.

If I build the models they will not be scale specific per se; rather the largest model will have to be no bigger than 3 1/2" in order to fit on the Hexon tiles.

More to be posted and and when it happens - you can rest assured of that!