Following on from my post of yesterday I spent a little time assembling a couple of 18mm units for comparison purposes. 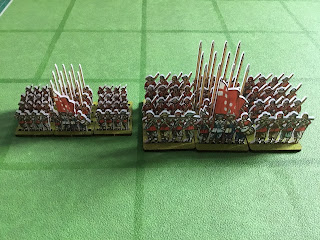 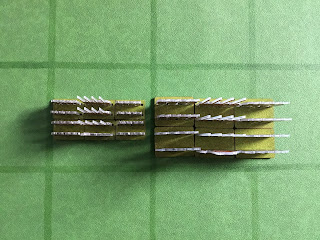 ....and the aerial view showing the ‘footprint’

The grid in the pictures is 4” across and you can see that the 18mm version sits snugly in it. This is important because it leaves sufficient space within the grid area for any terrain. It also means that I can use full sized units which, because they are using smaller figures, still preserves the all important mass effect. 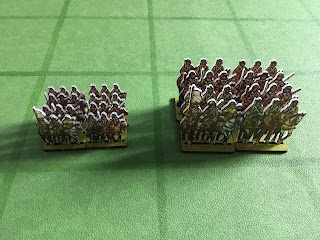 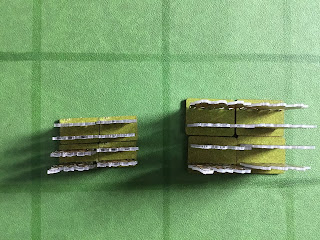 ....and the aerial shot showing the ‘footprint’

A further refinement - and this is a personal choice - I would look to use model guns rather than the supplied cannons simply because they look better in my opinion.

I am now fully reconciled to using 18mm Wofun and in many ways it has made a number of ideas far more achievable - the fact that you get twice as many figures for the money is a powerful incentive as well as the fact that I can deploy full sized units within a grid area and still have space for terrain (I will be looking at 15mm scaled models for this).

As far as the 28mm collection is concerned the full break down of this is as follows:

Mmm, the 18mm figures look quite attractive and maybe a better option. But let's play with the death star instead! merry Christmas.

I think that changing over to the 18mm figures is going to an excellent choice. The larger figures do look nice, but the smaller ones have the advantage of being both half the price and giving a much better impression of numbers on the tabletop.

Merry Christmas Bob! I am really taken with the 18mm figures and I wish I had opted for them originally but that is froth on my life’s wake so to speak.

I was rather pleased with the Death Star idea but my wife remains to be convinced....

Agreed on all points!

Completely agree on the smaller scale figures David. Better solution all round.

The 18mm figures definitely look great and will work better with your grid.

Smaller figures means more room to manoeuvre on the battlefield, gotta go for the 18mm?

You are absolutely right - and that is what I am doing!

Season’s greetings old chap! 18mm is the way forward and so this is what I am going to do. It works far better on my playing areas and also still has that mass effect - you should see the highlanders!

My thoughts exactly! In many ways the mass effect is even better as I shall be using whole regiments - 48 infantry and 24 cavalry - rather than breaking them in two halves. 18mm also makes the games a whole lot more manageable as I can use my existing playing ares readily enough.