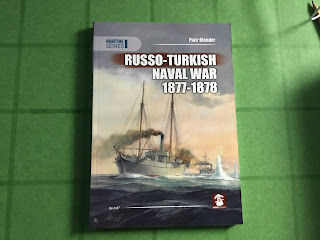 A quite superb title - I only wish it was in hardback! Note the positions of the spars on the leading ship - very much looking to operate with a reduced sailing rig

Part of my ship building programme includes a selection of ships for the Russo - Turkish War. My main references for this is the excellent book by Piotr Olender as well as my old friend The Ottoman Steam Navy 1828 to 1923 although I have it on very good authority that apparently the latter is not quite as good as it appears. Naturally Conways also features (I own the ‘holy trinity’ of the 1860 to 1905, the 1906 to 1922 and the volume going to 1946) as well the internet which has been a revelation in respect of information if you are prepared to do a little digging. 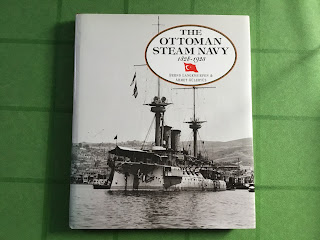 I thought this was the definitive work on the subject but apparently this is not the case. I always found the coverage of ships a little uneven but the redeeming features of plenty of pictures and some very useful plans made up for it! It is a good book all the same.

I have a certain amount of wargames history with the Turkish navy although primarily from the Balkan and Great War period so it has been a really enjoyable experience looking at those ships the Turks had from their original commissioning and in their original configuration. Many of these earlier ships were rebuilt and served in the later periods - not exactly in a hugely successful way it must be said - but given the parlous economic situation the Ottomans routinely found themselves in modernising an old ship was probably a better bet than building from new.

Anyways, aside from the Danube river theatre I wanted to get some deep water models built otherwise the whole project would have been very similar to what I am doing for the ACW - mainly river and coastal actions. This way I am covering a wide strategic canvas so to speak.

I did not want to go overboard (never a great idea when on a warship....) with the build and fortunately the naval forces for both sides were quite modest although the Turks definitely had the advantage, in numbers if nothing else. I finally settled on five or possibly 6 ironclads.

To give you a flavour of how my construction process works and just why using Warbases was such a life saver take a look at the following. 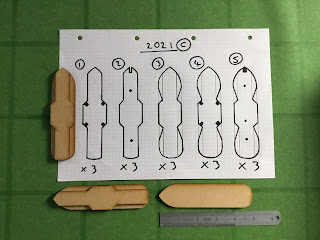 Using the template on the right as the base of the hull you can see how the layers are built up. I am waiting on the hull shapes you see (in the quantities stated) to finish this pat of the process. The holes are where the masts will sit and the notches are gun ports and also for the bowsprit as all of these will have a full sailing rig. The two diagrams on the left are all that is required for the two hulls I have started on - in this case the Feth-i Bulend and her sister. The larger three are for the Messudiye. 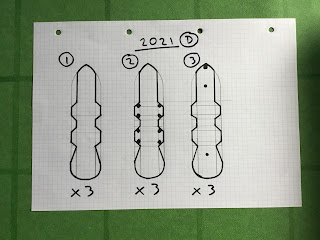 The above are for the Muin-i Zaffir and her sister ship. In both the above pictures you can see the gun sponsons and the central box battery. getting these laser cut would be immeasurably more accurate than anything I could do by hand!

The Messudiye, as befits her size will have a hull a full 6 layers deep (meaning she will be 18mm tall at the main deck level. Feth-i Bulend and the Muin-i Zaffir will be 4. In actuality both of these were roughly three quarters of the length of the Messudiye and a third of the displacement but I shall be building them to the same length of 5” (and thereby having my soul cursed for all eternity!). As they are primarily for use on a grid it does not make any real difference in respect of the size in my opinion.

Once I have the hull assemblies the rest of the model is very straightforward. All I will then add will be hatch covers (usually placed where there is an empty space on the deck!), funnels and the masts and spars. I need to think about deck mounted artillery - the Peter Pig models are a little too detailed for the models - and am also looking at adding ship’s boats at some point.

Hatch or gun port covers are usually from card, funnels are from dowel rod cut to length, masts are from bamboo skewers, spars and flagstaffs are from cocktail sticks.

I wanted to beef up the Russian navy so I shall build two or three of the Ekaterina ll class despite them not being commissioned until the mid to late 1880s. Certainly the Turkish navy had not changed since the end of the war and in fact had probably gotten worse! This ship will be a challenge for sure given the curious arrangement of 3 barbette gun positions. These will be the last models for the Russians for this project and they will only be built once everything else has been. It has given me an extra idea though. 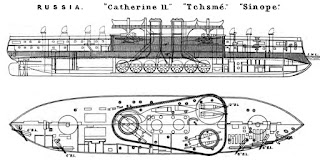 Now that is going to be fun to build and no mistake!

The Russians were very concerned about the possibility of the Royal Navy entering the Black Sea to prop up the Turks (bear in mind the Bombardment of Alexandria in 1882) and in fact the class of ironclads mentioned were built with this threat in mind. They were built with two barbettes forward and one aft with the forward two deployed side by side. This gave them a four gun forward broadside considered to be very helpful when used in support of amphibious landings as well fighting in a confined roadstead with limited room for manoeuvre.

Mention of the British brings me to the final part of this post. The final part of this project will be the building of a Royal Navy squadron - no more than six models for the battleships, possibly with some support vessels - to help keep the Russians honest. Paul Hague in the first volume of his Sea Battles In Miniature fought an action between the Royal Navy and the Russians using his own rules - and it was great fun to read. This would take the project into ‘imagi-naval’ wargames which I have no problem with at all.

This all seems like a lot of work but it should be viewed through the prism of being both very practical and spread out over the next couple of months. Most of the models for the Russo Turkish war are of a simple style to build with the sailing rig being the thing that takes the longest to tackle. With the exception of the pieces for the four Russian ironclads (and for the British although one ship may be built alongside the Messudiye) I will have everything I need to build the models from stock.

First of all though, I need to finish the ACW part as well as the rules.

I still rate the Ottoman Navy book, even if there are a few omissions and inaccuracies.

I must admit I wonder how well the Osmaniye-class would have performed in combat, both before and after their reconstruction by Ansaldo in the 1890s.

For sure the Ottoman book is good but apparently there are a few holes and errors in it. Still very handy though!

Given the notoriously bad Turkish care and maintenance, shortage of manpower and general malaise I suspect probably not well!

I am looking forward to giving some of them a spin when they are built though!

You say only 6 RN ships David. Are you sure it will only be 6? I imagine project creep will appear as we are all weak when it comes to things like this;)

BTW, the Turkish ships look great and love the design thinking behind them with their guns facing forward to support landings and narrower areas of action.

I am planning six battleships for the RN - I really want to keep it that if I can - and perhaps some support types. In many ways it will the grand finale of my ironclad project for the time being but I need to get the ACW completed first, then the Russo Turkish.

I am quite taken with the Russian design and am looking to working out hoe to build them!

It was I that was chatting to DC about the Ottoman Steam Navy. i always rayed it, however whilst I was working on my own Turkish squadrons in 1/1200 I ended up chatting with a Turkish naval historian who was quite scathing, saying a lot of the drawings are wrong, ships data is confused, ship histories similarly so. I'm hoping that his ire may one day turn into a new volume :)

If he does decide to write a more accurate book about the Ottoman Navy, I’d be at the front of the queue to buy a copy! In the meantime, I’ll use whatever sources that I can.

Hello there Bob and David,

If he ever gets to penning a title I will certainly be in the queue for it!

As you said though Bob, it is all we have a present so let’s use what we can until something better comes along!